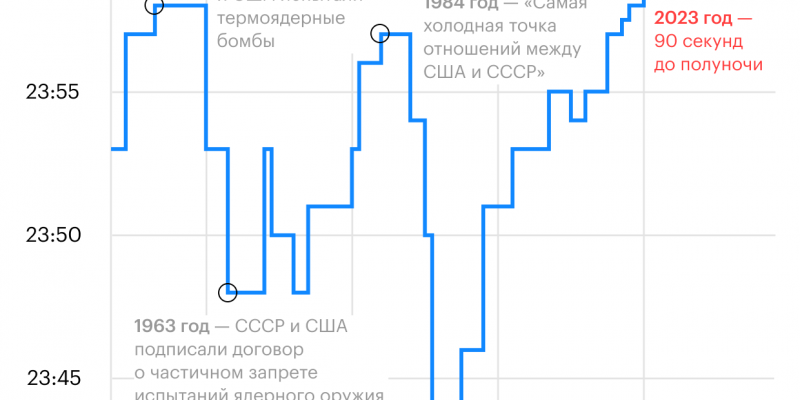 The hands of the Doomsday clock have been moved forward by ten seconds, now for the first time in their history they show one and a half minutes to midnight. How the time on the clock has changed since 1947 — in the infographic of RBC

What is the Doomsday clock and who translates its hands

The Doomsday Clock was created in 1947 as a metaphor for how close humanity came to self-destruction by midnight. They were launched by the American magazine “Bulletin of Atomic Scientists” to draw the attention of mankind to the threats of nuclear weapons (in 1945, the United States atomic bombed the Japanese cities of Hiroshima and Nagasaki). Then it was seven minutes to midnight on the clock.Initially, the arrows were moved by the editor of the magazine Eugene Rabinovich, based on the conclusions of scientists and experts in the field of nuclear weapons. After his death in 1973, the decision to move the arrows (forward or backward) was taken by the expert council. The Council also consults with other scientists and experts, including 13 Nobel laureates. Recently, climate change has also been taken into account among the factors.