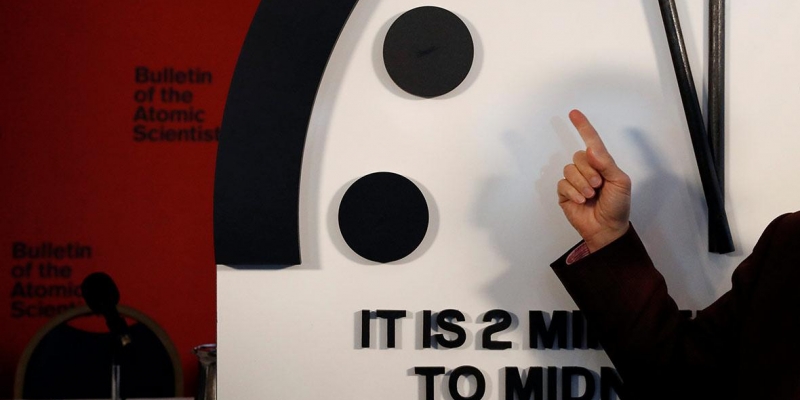 This is the closest position to midnight to which scientists have set the “time” for the entire existence of the clock. Now they show an “unprecedented danger,” a message on the bulletin’s website says.

The clock is set to “90 seconds to midnight”, mainly due to the situation in Ukraine. According to scientists, Russia’s actions in a neighboring country raise the fundamental question of how states interact, destroying the norms of international behavior that underlie the successful fight against various global risks. The report says that “veiled threats” of Moscowthe use of nuclear weapons “reminds the world that the escalation of the conflict,”accidental, intentional or as a result of miscalculation,”is a terrible risk,” and the probability that the conflict will get out of control is very high. Among the episodes in Ukraine that shifted the hands of the clock closer to midnight, experts identified the fighting in the vicinity of the Chernobyl and Zaporozhye nuclear power plants.

Another factor related to Russia is the situation around the Strategic Offensive Arms Treaty (START III) between Moscow and Washington, which entered into force in 2011 and was extended for five years in 2021. This is the only Russian-American arms control treaty that is still in force. If the parties do not resumeThe negotiations will not find a basis for further arms reductions, the report notes, the treaty will simply cease to exist in February 2026, when its validity expires. This will “put an end to mutual inspections, increase distrust, spur a nuclear arms race and increase the likelihood of an exchange of nuclear strikes,” they warn.

The conflict in Ukraine is not the only reason to switch hands closer to midnight: the new time has also been affected by the continuing threats associated with the climate crisis, as well as the destruction of global norms and institutions necessary to reduce the risks associated with the development of technologies and biological threats, such as COVID-19.

Rachel Bronson, President and CEO of Bulletin of the Atomic Scientists, said the decision to move the arrows to this position was not an easy one. “We live in times of unprecedented danger, and the Doomsday Clock reflects this reality. 90 seconds to midnight is the closest time to midnight that the clock has ever been set for, and this decision was not taken lightly by our experts. The US government, its NATO allies and Ukraine have many channels for dialogue; we urge leaders to use all of them to the fullest to turn back the clock,” she said. Read on RBC Pro 10 stocks that will not be affected by the problems of the economy in 2023 The struggle for purity: what is the West going to replace oil and gas from Russia Learn to doubt: how uncertainty helps to make decisions Russia is the third in terms of calculations in yuan. How have deliveries and payments changed

Experts also appeal to the United States with a recommendation to “keep the door open for principled cooperation with Moscow” in order to reduce the nuclear risks that the conflict in Ukraine entails. In this context, it is important, in particular, to maintain stable contacts between the United States and Russia at the level of the highest military leadership, the report notes.

The American journal “Bulletin of Atomic Scientists” covers issues of international security and threats related to weapons of mass destruction (WMD). It was created in 1945 by Nobel Prize-winning physicist Albert Einstein and a group of scientists from the University of Chicago who participated in the development of nuclear weapons as part of the Manhattan Project. In 1947 «Bulletin»he built the so-called Doomsday Clock, where midnight symbolizes the apocalypse, and the countdown to it is the degree of threat. The time on the clock is set annually by the members of the Council for Science and Security of the Bulletin in cooperation with the Council of Sponsors, which includes ten Nobel laureates.