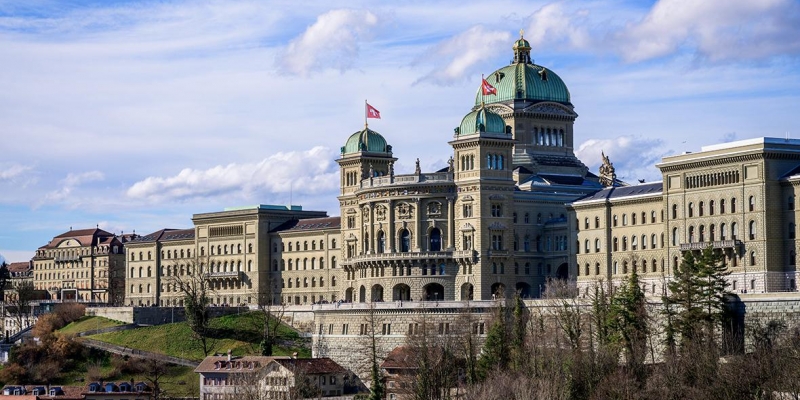 ShSwitzerland has imposed a ban on the export of its military goods to Ukraine and Russia Switzerland has adopted the eighth package of EU sanctions against Russia, including an embargo on the supply of weapons to Russia, which partially applies to Ukraine

The Federal Palace in Bern

Switzerland has imposed a ban on the export of its weapons to Ukraine and Russia, it follows from the message of the Ministry of Economy of the country.

“In addition to the measures contained in the eighth package of EU sanctions, the Federal Council has also imposed an arms embargo on Russia, which partially applies to Ukraine for reasons of Swiss neutrality,” the ministry said in a statement. It clarifies that the arms embargo in Switzerland has so far been applied on the basis of legislation on the control of military goods and materials.

The Federal Council has banned the provision of services to Russia and Russian companies in the fields of IT, engineering, architecture, as well as legal services.

In early October, the European Union introduced the eighth package of sanctions against Russia in response to the annexation of four territories of the DPR, LPR, Zaporozhye and Kherson regions. The list of restrictions includes the establishment of a ceiling on oil prices when it is supplied to third countries, as well as a number of export and import restrictions, a ban on crypto wallets for Russians and other measures, in particular a ban on engineering and legal consulting services.

On October 26, Switzerland imposed restrictions on the export of certain military goods to Ukraine, since the right of neutrality obliges it to impose the same restrictions on the parties to the conflict. In June, it allowed the supply of weapons with Swiss components to Ukraine. Prior to that, the Swiss authorities refused Germany permission to supply Kiev with ammunition for the German Marder BMP, which are manufactured in Zurich, citing neutral status.

Read on RBC Pro What’s wrong with finding b2b clients and how to fix everything Amendments for applicants for “Golden Visas” in the UAE: what they are changing The end of preferential mortgages: what will happen to the shares of developers Circles on the water: will the Web 3.0 bubble burst after the collapse of the FTX crypto exchange

Despite its neutral status, Switzerland supported the EU sanctions against Russia announced in connection with the special operation in Ukraine.

The Russian Foreign Ministry called on the United States and NATO to stop supplying weapons to Ukraine at the end of April. According to Foreign Minister Sergey Lavrov, “various weapons are coming to Ukraine through Poland and other NATO countries in an endless stream.” Later, he said that the United States would not be able to deprive Russia of the right to its own voice in international affairs by supplying weapons to Ukraine.

In July, Lavrov said that the supply of Western weapons to Ukraine was delaying the conflict. “The attention of the Secretary of State was drawn to the fact that the ongoing pumping of the AFU and national battalions with American and NATO weapons, which are being used on a large scale against civilians, only prolongs the agony of the regime in Kiev, prolonging the conflict and multiplying the victims,” Lavrov said in a conversation with Linken in July.