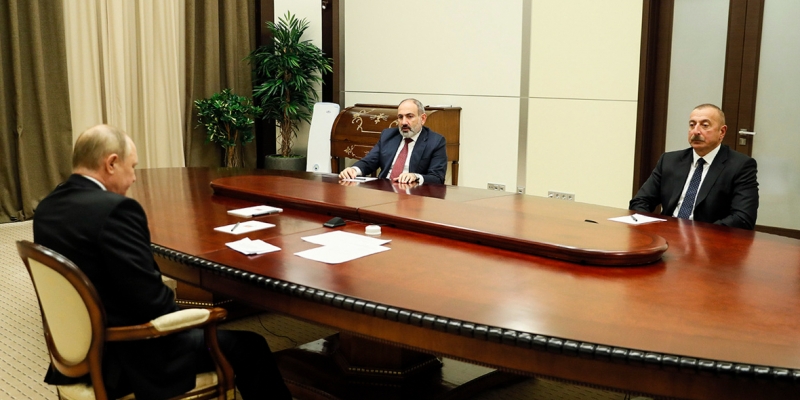 “Azerbaijan is determined to turn the page of the long-standing confrontation with Armenia, to begin the stage of normal interaction,” he said (quoted by Sputnik Azerbaijan).

Aliyev and Pashinyan positively assessed the meeting. According to the Armenian Prime Minister, “positions were clarified on many issues and it turned out that there are no discrepancies on some issues.”

In a joint statement of the three leaders, which was published by the Kremlin, it is said that Putin, Aliyev and Pashinyan agreed to create mechanisms for the delimitation and demarcation of borders between Armenia and Azerbaijan and to increase the level of stability and security on the Azerbaijani-Armenian border. The parties confirmed that they intend to follow the points of the agreements on Nagorno-Karabakh of November 9, 2020 and January 11 of this year “in the interests of ensuring stability, security and economic development of the South Caucasus”.

The participants of the meeting “made noticeable progress” on humanitarian issues and the topic of economic ties, Putin said. “As a first step, we talked about unblocking transport corridors,” he said (quoted by TASS). This applies to both the railway and automobile communication, the president said.

Putin also said that the deputy prime ministers of the three countries that are part of the trilateral working group on Nagorno-Karabakh will meet in Moscow next week. They will sum up the results of the talks between Putin, Aliyev and Pashinyan and announce agreed solutions.

At the beginning of the trilateral meeting, Aliyev said that almost all the points of the agreement on Karabakh from November 2020 have been fulfilled, except for unblocking communications. Pashinyan disagreed with this, noting that the problem of hostages and other detained persons remained unresolved.

The talks of the three leaders were held in Sochi. After their completion, Putin held a separate meeting with Pashinyan.

Despite the peace agreements concluded last year, armed clashes regularly broke out on the border of Armenia and Azerbaijan. On November 16, one of the shootings turned into full-fledged fighting, both sides suffered losses.