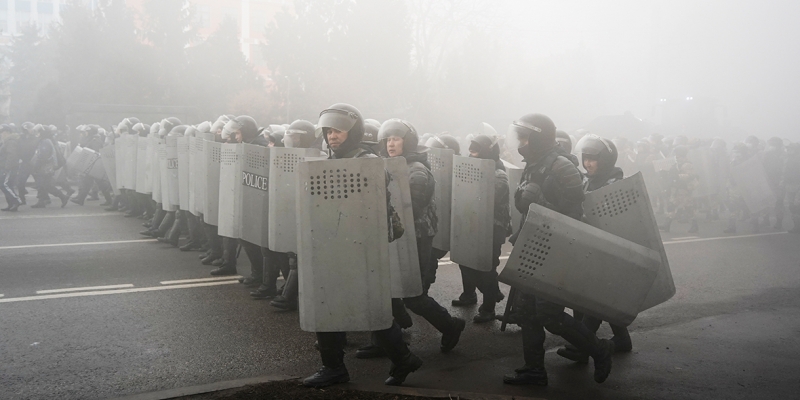 A Russian citizen died during riots in the Zhambyl region of Kazakhstan. This was announced by the Russian Embassy in the country on its VKontakte page.

“The Consulate General of Russia in Alma-Ata received information that in the city of Taraz (Zhambyl region) In the south of Kazakhstan, during the pogroms on January 6, a Russian citizen, mother of three children M. V. Kim, born in 1995, was killed by bandits, the report says.

The diplomatic mission noted that the crime was committed at the moment when Kim was leaving her place of work.

The Consulate General contacted the relatives of the deceased, and also sent an appeal to the leadership of the region with a request to take control of the situation and provide possible assistance to the girl’s family.

In addition, the Embassy sent a request to the law enforcement agencies of Kazakhstan calling for a comprehensive investigation of this crime. “We expect that the identity of the criminals will be established, they will be brought to justice and punished to the fullest extent of the law,” they clarified.

RBC has contacted the Ministry of Internal Affairs of Kazakhstan for comment.

Protests in Kazakhstan began at the beginning of this year after a twofold rise in the price of liquefied gas from 60 to 120 tenge (from 10 to 20 rubles). In the country, it is often used as an automobile fuel. By the evening of January 5, the demonstrations escalated into clashes with law enforcement officers. The protesters seized administrative buildings and premises with weapons.

Against this background, the President of Kazakhstan Kassym-Jomart Tokayev imposed a state of emergency in the country and announced the beginning of an anti-terrorist operation. In addition, Tokayev asked for help from the CSTO countries, which have already completed the deployment of a peacekeeping contingent on the territory of the country on January 9. The withdrawal of the troops of the united group began on January 13, on the same day the state of emergency was lifted in several regions.

According to the authorities, about 1,300 enterprises and organizations, more than 100 shopping centers and banks were affected by the unrest in the country, about 500 police cars were burned, and the total economic damage could amount to $2 billion. The number of victims was at least 2,265 people, 164 more were killed.

After the protests, 494 criminal cases were opened in Kazakhstan, of which 44 cases were opened on acts of terrorism, 34 on mass riots and 15 on murders. There are 524 violators in temporary detention facilities, the courts have arrested 412 more, the Prosecutor General’s Office of Kazakhstan reported.