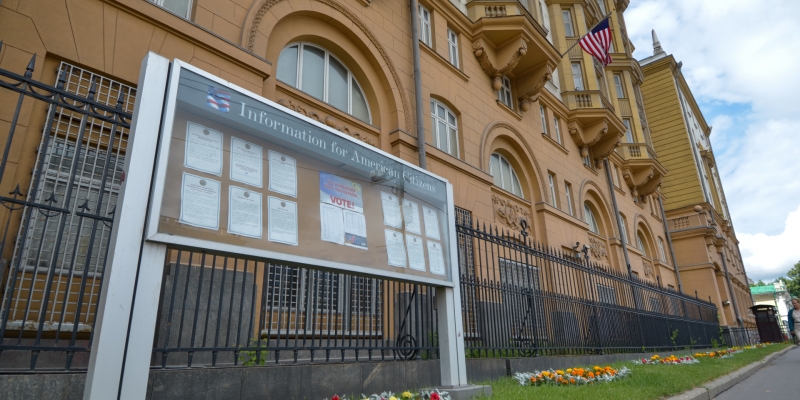 In The State Department is concerned that the US Embassy in Russia will not be able to carry out diplomatic work due to staff shortages. The staff of the diplomatic mission in Moscow decreased from 1200 people in 2017 to 120

The building of the US Embassy in Moscow

The US Embassy in Russia will have to reduce its work to performing technical functions due to staff shortages. This was stated at a briefing by the official representative of the State Department, according to Reuters and AFP.

“We will face a situation, not next month, but sometime next year, when it will be difficult for us to do anything other than look after the embassy building,” he said.

According to the representative of the State Department, the staff of the US Embassy in Moscow decreased from 1,200 people in 2017 to 120. The diplomatic mission has enough staff to perform basic tasks – opening and closing gates, ensuring the security of telephone calls or controlling elevators, he continued, noting that diplomatic work in such conditions is unlikely to be possible.

“We need to make progress faster [in the current situation],” the official added.

A new round of aggravation of relations between Russia and the United States occurred in April, when the White House expelled ten Russian diplomats from Washington as part of a new round of sanctions against Russia. The US said that representatives of the Russian special services were allegedly among the staff.

Moscow rejected these accusations and responded in a mirror manner. In addition, Russia has added the United States to the list of unfriendly countries.Now American representative offices will not be able to hire Russians and other foreigners. In this regard, the United States will be forced to cut more than 180 employees at diplomatic missions in Moscow, Vladivostok and Yekaterinburg, Secretary of State Anthony Blinken said.

U.S. Ambassador to Russia John Sullivan, in turn, warned that due to a shortage of staff, consular services will be unable to process at least some visa applications. In this regard, the US Embassy advised Russians to apply for visas in other countries.