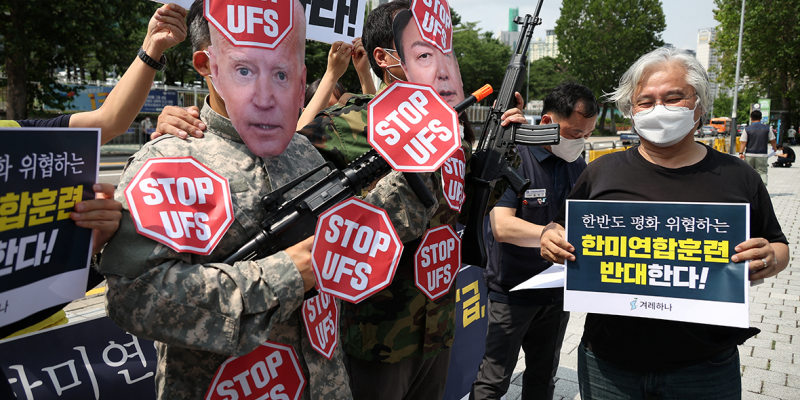 PThe South Korean resident did not receive Pelosi after her high-profile visit to Taiwan. The trip, which caused disagreements between the politician and the US administration, may negatively affect the image of Washington, experts say

After the resonant visit of the Speaker of the US House of Representatives Nancy Pelosi to partially recognized Taiwan, her stop in South Korea as part of an Asian tour looked, contrary to expectations, much less remarkable. On Thursday morning, the Associated Press reported Pelosi’s intention to visit the demilitarized zone between North and South Korea. This territory, which is also called the joint Security Zone, is jointly controlled by the US-led UN command and North Korea.

Pelosi planned to visit the village of Panmunjom, where a ceasefire agreement was signed in 1953, which became the end of the Korean War. The visit to this zone was supposed to be a landmark event— former US President Donald Trump was the last high-ranking American politician to visit it for talks with North Korean leader Kim Jong Un in 2019. However, neither photos of the politician in Panmunjom nor quotes from her speech to the US military appeared in the media.

Pelosi, who regularly posts about the course of the Asian tour on her Twitter account, also bypassed this event. The fact that this is the first visit of the Speaker of the US House of Representatives to the country in 20 years has also gone unnoticed. At the same time, American President Joe Biden was in Seoul in May 2022.

The most discussed event of the visit was the fact that Pelosi was not received by South Korean President Yoon Seok-el. This is the first leader who refused a personal meeting with the Speaker of the US House of Representatives as part of her Asian tour. Prior to that, it was hosted by Singapore’s Prime Minister Li Xianlong, Malaysian Prime Minister Ismail Sabri Yaacob and Taiwan’s President Tsai Ing-wen. Pelosi is expected to hold talks with Japanese Prime Minister Fumio Kishida on Friday.

The formal reason why Pelosi failed to meet with the South Korean leader was the discrepancy in schedules – the president had a vacation on the dates of her visit.

“President Yoon’s vacation schedule and Speaker Pelosi’s visit to the Republic of Korea coincided, and we did not change our schedule,” the presidential office said in a statement. However, Yoon Seok-yeol was in Seoul on the dates of Pelosi’s visit and had the opportunity to meet with her, but wished to limit himself to a 40-minute telephone conversation. Local media also drew attention to the fact that none of the South Korean dignitaries met Pelosi on arrival, although an honor guard was sent to the airport. The US Ambassador to South Korea, Philip Goldberg, and the commander of the US armed forces in the country, Paul Lacamera, were waiting for her at the ramp of the special board.

Read on RBC Pro Pro “Nobody understood the boss.” How to Change Speech to Better Guide Instructions Pro Miserly Billionaire: How Gates, Buffett, Brin Spend Money in Everyday Life Articles Pro What steps will help build a healthy relationship with alcohol Articles Pro How companies cut salary costs: four Scenarios ArticlesPro Delicious medicine and a way to lose weight: we analyze the truth and myths about spices of the Article Pro “The worst corporation” in the world: what it’s like to work at Walmart in 4 paragraphs of the Article Pro The advantages of “average people”. Why you should stop chasing talents Instructions Pro How outgoing Western companies will free up 700 thousand square meters of space Articles

The South Korean newspaper The Chosun Ilbo, citing sources, reported that this situation was regarded by the American side as a disregard for protocol and caused outrage at the embassy. It was aggravated by the fact that during Pelosi’s arrival, the president of the country was watching a play. As a result, Pelosi held talks only with the Speaker of the National Assembly of the Republic, Kim Jin-pyo. South Korean Foreign Minister Yun Bence was at a meeting of ASEAN foreign ministers in Cambodia at the time.

According to Asia Times, such a cold reception could have been given to Pelosi due to the fact that South Korea became the first stop on the Asian tour of the politician after her visit to Taiwan, which caused criticism from China, which considers the island part of its territory. At the moment, Beijing is conducting unplanned military exercises and in facthe took the island in a ring. “Now is a very bad timing for a personal meeting [of the President of South Korea] with Pelosi, as this may once again provoke Beijing, and it is also unknown how it will be perceived by other counterparties,” Egor Spirin, a junior researcher at the MGIMO Institute of International Studies, told RBC.

In turn, the Director General of the Russian Council for International Affairs (RIAC) Andrei Kortunov believes that after the 82-year-old Pelosi’s trip to Taiwan, we can talk about a certain toxicity of the politician. “It’s still one of her last major trips. As far as I know, Pelosi will not run this year (in the congressional elections.—RBC) and she leaves the political arena. Probably, there is some kind of toxicity, but it is still carried out in compliance with all decency. She has been in Congress for many years, and Biden will note this, but Pelosi is a departing figure. This is clear to everyone,” Kortunov said.

Washington is unhappy with Pelosi’s trip to Taiwan

Upon returning to the US, Pelosi may also face a cold attitude. According to Bloomberg, despite the White House’s statements that a politician has the right to decide on her own whether to fly to Taiwan or not, Biden administration officials were furious that the speaker of the House of Representatives wanted to make this visit a significant milestone in her career, despite an extremely delicate moment in relations with Beijing». According to agency sources, the White HouseHe sent senior officials of the National Security Service and the State Department to Pelosi and her team, whose task was to convince her to postpone the visit. When the White House realized that Pelosi was not ready to do this, Biden publicly announced that, according to the US military, her trip “does not seem to be a good idea”. He did not call for postponing the visit, as the White House was not sure that Pelosi would do it under such circumstances.

Despite the differences between the White House and Pelosi, it is premature to talk about an internal split, since both Biden and Pelosi belong to the centrist wing of the Democratic Party, Kortunov noted.

“Pelosi has no fundamental differences with Biden. It is important how this is perceived by US partners. If you look at the same Beijing, then during my contacts with Chinese colleagues they tell me: either Biden is cheating and the visit was agreed, but he himself wants to stay away and therefore declares disagreements, or it is unclear who is responsible for foreign policy,” he added. When the Speaker of the Parliament and the president belong to the same partyHowever, they cannot agree, the country is perceived as an unreliable partner and there can be no strategic agreements with it, Kortunov continued. “Biden should then be perceived as a lame duck, and, accordingly, we need to wait for new elections. In any case, this is not good for the image of the United States and for the prospects of reaching agreements in principle with both allies and opponents of Washington,” the expert concluded.

According to Spirin, the current disagreements do not indicate a conflict between the White House and Pelosi, but rather weak coordination. “The anti-Chinese consensus, of course, exists in the US administration. But the question is that Pelosi’s visit really could have been better timed,” he said. The situation, according to the expert, was influenced by other factors, in particular the November US congressional elections and Pelosi’s personality itself, since the politician is knownhis activism. “It seems to me, as well as to a number of American analysts, that symbolic rigidity towards China has become valuable in itself, without realizing the clear results that Washington wants to achieve,” Spirin concluded.

politician, President of the United States