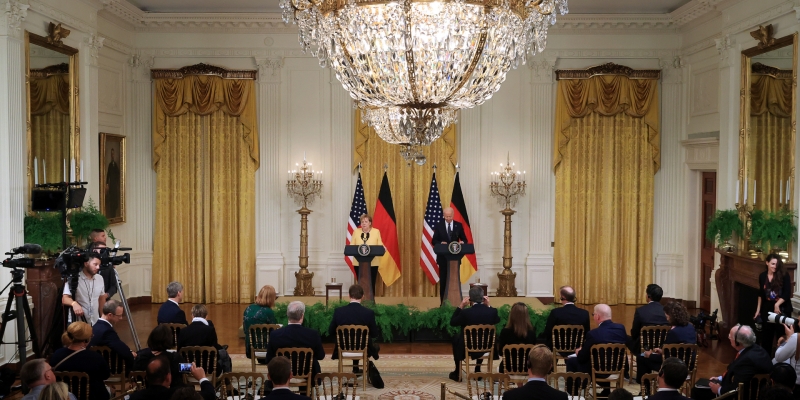 The United States and Germany have agreed that they will apply or seek sanctions against Russia if it starts using the Nord Stream-2 gas pipeline for political purposes. Earlier, Berlin and Washington came to a deal on the project

The United States is ready to hold Russia accountable if it considers that Moscow is using the Nord Stream-2 gas pipeline to the detriment of the interests of Ukraine or other countries. This was stated by a highly qualified representative of the State Department, the transcript of the briefing is published on the department’s website.

“Answering the question about whether we refuse to oppose [the project], I will emphasize that we are still opposed to the Nord Stream 2. We still believe that this is a project of [spreading] Russian malicious geopolitical influence. Nothing has changed in this regard, ” the highly-placed representative of the State Department said.

He confirmed that the United States remains committed to following the law on the application of sanctions against Nord Stream-2, and a report on measures against the project participants will be submitted to Congress in mid-August.

“We remain opposed to the project and believe that this is a bad deal for Ukraine and the rest of Europe. But we are also pragmatic, ” she said. According to the representative of the State Department, the United States is focused on being ready to respond to Russia if it uses “energy resources as a weapon”.

On Wednesday, Germany and the United States came to an agreement on the “Nord Stream-2”. In a joint statement of both countries, they confirmed that “they will take measures against Russian aggression and destructive actions in Ukraine and beyond”. In particular, if Russia tries to “use energy as a weapon”, Germany will require the EU to take “effective measures”, including sanctions.

In addition, Germany has pledged to seek an extension of the contract for the transit of Russian gas through Ukraine for another ten years after 2024. Also, the United States and Germany will help Ukraine with the diversification of energy sources and will allocate financial support to Kiev for this.

“Nord Stream-2” involves the construction of two strands of a gas pipeline with a length of more than 1.2 thousand km each along the bottom of the Baltic Sea. According to them, Russian gas will be transported to Germany through the maritime territories of Russia, Germany, Finland, Sweden and Denmark.

The pipeline was supposed to be ready by the end of 2019, but US sanctions prevented the construction. Washington believes that “Nord Stream-2” threatens the energy security of Europe, since Russia can use gas supplies as a lever of pressure. In turn, Germany opposes US sanctions, calling them interference in the country’s affairs.

Last week, US President Joe Biden and German Chancellor Angela Merkel held talks. As Merkel said, Germany and the United States see the project differently, but both countries agree that Ukraine will remain the territory through which gas transit will be carried out. If Russia does not accept this state of affairs, Germany will “actively act”, the Chancellor promised. According to her, we are talking about “a lot of tools, not only from Germany, but also from Europe, for example, sanctions”.