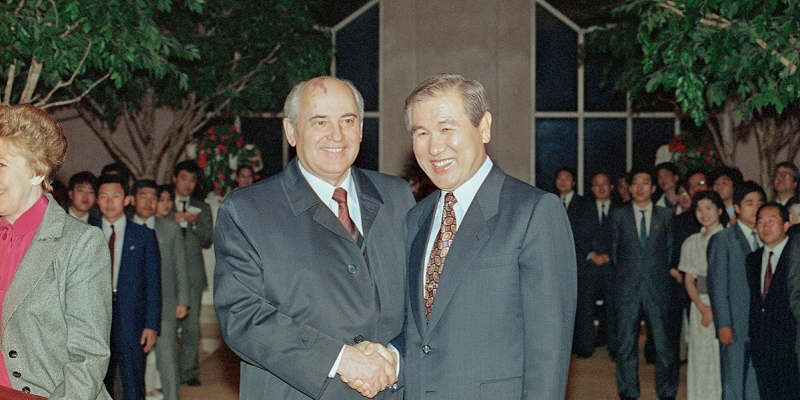 Roh Dae-woo died in hospital at the age of 88. The exact cause of death is not reported

Former South Korean President Roh Dae-woo has died, Yonhap reports. He led the country from 1988 to 1993. During his reign, South Korea established diplomatic relations with the Soviet Union.

Roh Dae-woo was born in 1932, participated in the Korean War of 1950–1953, was a career army officer. While still at school, he became friends with Jung Doo-hwan, who led the country in 1980–1988. Ro and Jeong graduated from the Korean Military Academy together in 1955, and in 1979 Ro Dae-woo received the rank of general.

In October 1979, President Park Chung-hee, who was carrying out economic reforms, was assassinated, and in December, Chong and some other officers carried out a coup d’etat. Ro, who was a high-ranking commander at the time, gave them decisive support and became a member of the Jung Doo Hwan-led junta. Chong became president in August 1980.

In 1981, Roh retired from military service and later held a number of ministerial posts, including Minister of Political Affairs (1981), Sports (1982) and Internal Affairs (1982). As head of the Seoul Olympic Organizing Committee from 1983 to 1986, he oversaw South Korea’s preparations for the 1988 Summer Olympics held in Seoul.

Roh Dae-woo won the 1987 presidential election and began his five-year term as president on February 25, 1988.

As president, Roh took a course to democratize South Korean politics. His Government established and strengthened diplomatic relations with the Soviet Union and China, achieved the admission of South Korea (1991) to the United Nations and signed a non-aggression agreement (1991) with North Korea.

In February 1993, Roh Dae-woo was succeeded as president by Kim Yong-sam, whose subsequent anti-corruption reforms were directed against Roh and Jong.

In October 1995, Roh publicly apologized for having illegally accumulated hundreds of millions of dollars during his presidency. He was charged and tried for corruption, as well as for rebellion and sedition, and for participating in the 1979 coup.

In August 1996, Roh Dae-woo was found guilty on all charges, he was sentenced to 22.5 years in prison, later the term was reduced to 17 years with a fine of more than $ 300 million. Jung Doo-hwan was also charged with multiple crimes and sentenced to death, but then the sentence was commuted to life imprisonment.

In 1997, Roh Dae-woo and Jung Doo-hwan were pardoned by the decision of President Kim Dae-jung and released from prison.