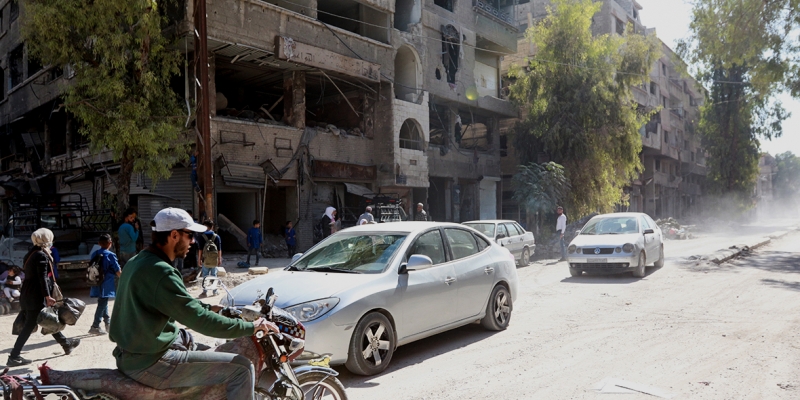 The explosive device went off in front of the lead car of the Russian military police convoy, none of the servicemen were injured

In Syria, an improvised explosive device (IED) detonated in front of a patrol of the Russian military police, Vadim Kulit, deputy head of the Center for Reconciliation of the Warring Parties, said at a briefing, according to a message from the Ministry of Defense received by RBC.

The Russian military were not injured. The incident occurred in Daraa province, near the settlement of Umm al-Maaten, while patrolling the M-5 highway. The IED went off in front of the lead car of the column.

Reports that Russian military vehicles were blown up by explosive devices in Syria are received periodically, some of these incidents end in deaths. So, in early June, a Russian soldier was killed when an armored car was blown up. In total, at least 120 people were killed during Russia’s military campaign in Syria (data from March 2021).

Kulit also said that in Idlib province, one Syrian soldier was killed and another was wounded during mortar attacks by terrorists. In the neighboring province of Aleppo, two Syrian army soldiers were wounded as a result of shelling.

The day before, the Central Air Force reported the death of another Syrian serviceman during shelling in Latakia province. The shelling was carried out by “militants of illegal armed formations”.

In some areas of Syria, government forces are still clashing with militants. At the end of September, in the province of Aleppo, a group of militants tried to move from the territory controlled by the Turkish forces to the territory where the Syrian military was located. During the breakthrough, five militants were killed. blown up by mines, at least ten were injured. Five servicemen were injured by the Syrian army.

In mid-September, President Vladimir Putin stated that pockets of resistance remain in Syria, nevertheless, 90% of the territory is under government control. He spoke about this during the unannounced visit of Syrian President Bashar al-Assad to Moscow.