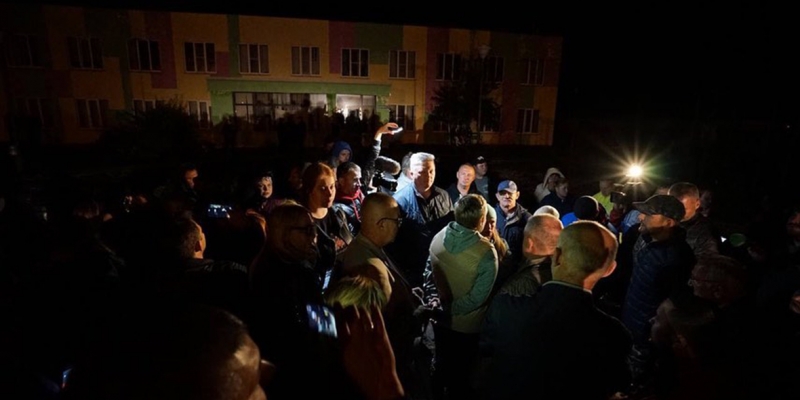 Mpeaceful residents demanded to close the hostel and deport its guests after the murder of a pensioner near Sergiev Posad, in which migrants are suspected. The district administration said that the suspects are not from the hostel

The governor of the Moscow region, Andrey Vorobyov, ordered to immediately close the hostel for migrants in Sergiev Posad, near which the day before there was a “people’s gathering” of residents who demanded the closure of the hostel.

“There are crimes that cause a special resonance with their cynicism, cruelty and because people really boiled over. The hostel in Buzhaninovo, near which this accident occurred, will be closed today. If the residents are against it, he does not belong there. The order to the head of the Sergiev Posad district has already been given, ” Vorobyov wrote in his Telegram.

“The safety of residents should not be compromised, so all such places that cause people anxiety and anxiety will be checked by law enforcement agencies in the coming days. Those who violate our laws will definitely be punished, ” the governor assured.

RBC has asked for a comment to the owner of the hostel, LLC “SEE Complex”.

The rape and murder of a 67-year-old pensioner in Sergiev Posad provoked a public outcry and demands to close the hostel. The body of a woman with signs of violent death was found on September 13 in a forest belt, near the SNT “Highway 2”.

Local news portals “Kopek” and “Alternative newspaper” reported on September 13 that the alleged murderers were detained. The source of the information was not specified in the “Kopek”, the “Alternative newspaper” referred to the reader’s letter, both publications claimed that the suspects weremigrants. Local residents came out to a people’s meeting, which was not coordinated with the authorities, at the hostel in the village of Buzhaninovo, where employees of the local enterprise “Eco-window” live. “Kopek” wrote that many visitors work at the enterprise, the protesters gathered demanded to deport the migrants.

They also insisted on meeting with officials and representatives of law enforcement agencies. A local resident told RIA Novosti that about 200 people came to the rally. Mash wrote that the hostel was taken under police protection during the protests. The head of the Sergiev Posad city district, Mikhail Tokarev, came to a meeting with residents and, according to the Telegram channel, promised that the authorities would demand to close the hostel, after that the locals dispersed.

The Central committee of the IC near Moscow after the “people’s assembly” reported on the detention of two suspects who really turned out to be migrants. These are citizens of “one of the neighboring states” (which one, it is not specified) born in 1988 and 1984. The investigation promised to check whether the detainees are legally on the territory of Russia and whether they are involved in other crimes, forensic, biological and genetic examinations have been appointed.

The press service of the administration of the Sergiev Posad municipal district told RBC that the suspects in the murder are not related to the hostel. “Those who live there have all the documents, work permits,patents, etc. They are located in the country and work completely legally, the police regularly conduct checks there. According to the police, there were no official complaints, ” the press service said.

The administration added that the suspects worked at a construction site in the SNT. They admitted their guilt.

As the press service pointed out, the deputy head of the city district Oksana Yarokhanova came to the “people’s meeting”, in the evening of September 13 Tokarev will meet with the residents and tell them Vorobyov’s decision to close the hostel.