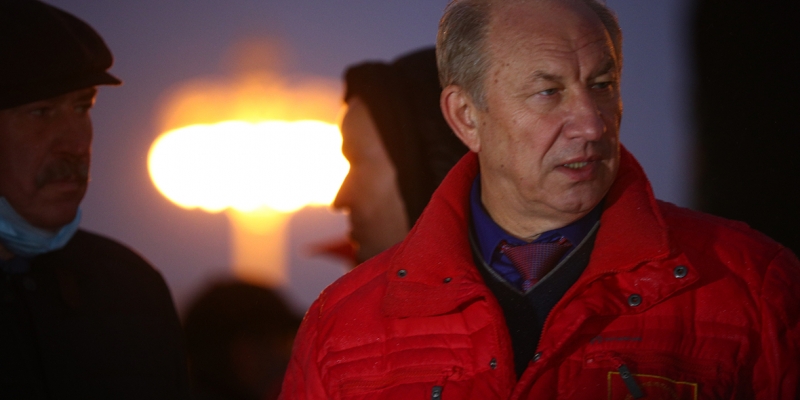 TThis decision was made at a meeting of the State Duma. Prosecutor General Krasnov, who came to him, called the deputy’s behavior “without exaggeration a disgrace.” The head of the Moscow City Committee of the Communist Party is known for supporting Navalny and sharply criticizing the authorities

During the plenary session of the State Duma, the deputy from the Communist Party of the Russian Federation, Valery Rashkin, was decided to deprive him of parliamentary immunity. This makes it possible to open a criminal case against him, initiate administrative proceedings, and conduct investigative actions. 343 deputies voted for, 55 against, two abstained.

Prosecutor General Igor Krasnov, who came to the meeting, in his speech called Rashkin’s behavior “clumsy attempts to mislead law enforcement officers”. “Thanks to the media, this disgrace has become known without exaggeration,” he said.”I have an extremely negative attitude to such manifestations of insincerity: a man who has taken up arms should continue to behave like a man, and not try to cause pity.”

The Prosecutor General recalled that Rashkin initially refused to cooperate with the investigation, “gave false testimony, he had signs of alcoholic intoxication.” “This behavior of Rashkin looks cynical and immoral!— Krasnov is sure.”I ask you to give your consent to the initiation of a criminal case against Deputy Rashkin.”

In response, the deputy said that he considers his persecution political. “No artiodactyl has ever been devoted to so much pathos on television. In my memory, only the Kennedy assassination was talked about more. I have not observed such a fuss about poachers, from whom the FSB seized hundreds of kilograms of bear paws and moose lips,” he noted. Rashkin is convinced that the realthe reason for the recent events is his “organized struggle for fair elections, which causes great displeasure and heartburn in the entire vertical of power.” He stressed that he did not know about the lack of hunting permits from his comrades who organized the trip, and called the scale of his persecution unprecedented.

The question of depriving the deputy of immunity caused a heated discussion among parliamentarians. Rashkin’s colleague in the faction, Georgy Kamnev, called the measure of restraint proposed for him— the prohibition of certain actions— too harsh and suggested replacing it with a milder punishment.

The fair-minded deputy Oleg Nilov predicted the appearance of “Rashkin’s list”, where other parliamentarians who were previously accused of poaching, but who were not punished, can get to. In turn, the head of the Fair Russia faction, Sergei Mironov, in his telegram channel, proposed to abolish the institute of immunity for deputies of all levels altogether. LDPR leader Vladimir Zhirinovsky accused the Communists of terror: “Your hands are covered in blood not only of this unfortunate moose in Saratov, we don’t know him. The whole planet is in blood!». After that, he left the State Duma meeting room.

At the end of October, in the Lysogorsky district of the Saratov region, the police detained Rashkin with an elk carcass in the trunk of a car. In addition, an axe and two knives with traces of blood were found in the car. Since then, Rashkin has been a suspect in the case of illegal hunting, investigated by the central apparatus of the Investigative Committee. Under the article on illegal hunting, a sentence of imprisonment for up to two years may be threatened.

Later, the deputy confessed to killing the moose, although he had previously claimed to have found the carcass of the animal. He considers himself a victim of a combination of circumstances, which he stated in the appeal. “I was misled by information about the availability of legal and executed documents for hunting,” Rashkin explained.And as a result, people unknown to me took advantage of it, who, apparently, participated in the provocation against me.

The Prosecutor General’s Office asked the State Duma for consent to conduct investigative actions with Rashkin. The agency also intends to achieve the election of a preventive measure against the parliamentarian related to the prohibition of certain actions. The damage from the actions of the deputy in the Prosecutor General’s Office was estimated at 80 thousand rubles.

After that, the State Duma commission on mandatory issues recommended removing immunity from the Communist deputy. In turn, the first deputy head of the Communist Party faction in the Duma, Nikolai Kolomeitsev, told RBC that the faction would be against the removal of immunity from Rashkin, and called what was happening an act of intimidation of communists.

Depriving deputies of immunity is not uncommon, they are much less often deprived of their mandates. Before Rashkin, 11 deputies were deprived of immunity due to accusations of various crimes, in particular, Ilya Ponomarev, Alexey Mitrofanov, Nikolai Parshin, Oleg Mikheev and others. At the same time, at least ten times since 1994, the State Duma has refused to lift immunity.

Deprived of immunity, the deputy was a deputy of the State Duma of five convocations. He is 66 years old, he joined the Communist Party in 1983. He has been trying to get elected to the lower house since its first convocation. During the presidential elections in 1996, he was a confidant of the head of the Communist Party Gennady Zyuganov, then worked as his assistant in the State Duma. In 2000, Rashkin, then a deputy, ran for the post of governor of the Saratov region, but was not allowed to participate in the elections. He has been the head of the Moscow branch of the Communist Party since 2010. Rashkin was repeatedly called a potential replacement for Zyuganov as head of the party, although he himself denied such a possibility.

Rashkin is known for opposition statements and scandalous parliamentary inquiries. So, in 2006, together with the ex-Minister of Roads of the Saratov region Gevorg Dzhlavyan, he accused Vyacheslav Volodin (also a native of the Saratov region) of corruption. The charges were not confirmed as a result of a check by the prosecutor’s office. The current speaker of the State Duma also sued a communist deputy who, at a rally in 2009, accused him of “crimes against the people, before the Russian nation.” In turn, Rashkin was able to sue 7.5 thousand euros by contacting the ECHR about this.

The deputy has repeatedly accused other deputies and politicians of corruption and talked about the so-called “Rashkin lists”, where he included such people. Rashkin spoke sharply negatively about Euromaidan and supported the annexation of Crimea to Russia in 2014. In 2015, he was included in the sanctions lists of the European Union.

In the summer and autumn, the Moscow branch of the Communist Party, headed by Rashkin, organized protests against mandatory vaccination against coronavirus. After the elections to the State Duma, several actions took place at which the Communists demanded a revision of the voting results due to disagreement with the electronic voting data. Also, the deputy has repeatedly expressed support for the convicted oppositionist Alexei Navalny.