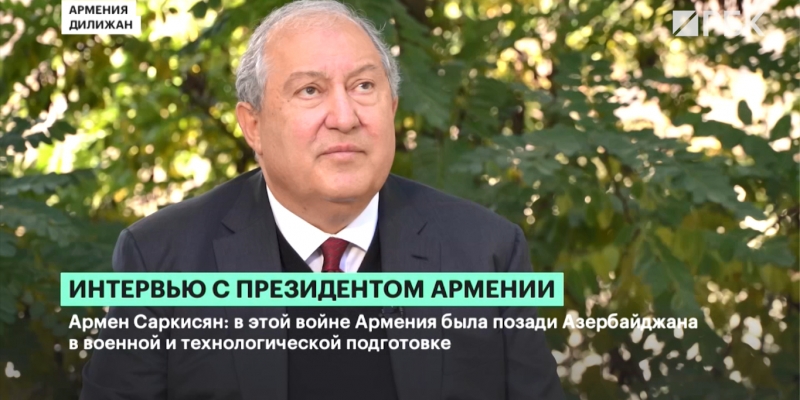 Armenia managed to overcome the crisis that developed after the Karabakh war, and it cannot be considered a failed state, President Armen Sarkissian believes

In the first months after the war, there was “confusion” in Armenia, but it is impossible to agree that Armenia as a result became a “failed state”. Armenian President Armen Sarkissian stated this in an interview with RBC TV channel.

“It’s clear that in the first months [confusion] began. It got to the point that our General Staff began to express certain ideas. It got to the point that for the first time in all three years [in power], I entered this building for the first time as president. I don’t run an army anymore, but I had to go there and have a serious talk with all these generals… That is, it was necessary to overcome such crises,” Sarkisyan said.

The result was the holding of early parliamentary elections, shortly before which Pashinyan resigned and became acting head of government. As a result of the elections, Pashinyan’s supporters regained a majority in the country’s parliament, and the politician again headed the Cabinet of Ministers.

“From the first day, I supported and expressed that the solution to this difficult moment should be a choice. We are also trying to be a democratic country. If we try, we need to play this game… And my suggestion was simple. First, you need to have a professional government so that no one says that the government supports someone. Secondly, it seems to me, it seemed then and it seems now that we should definitely do, think and work on changing the Constitution,” Sarkissian said about finding ways out of the political crisis.

The result of this year’s political crisis and early elections, Sargsyan called the transfer of “tension” from the streets to the parliament, where the political struggle fits into a civilized framework. “The important thing for me was the fact that we went through the elections this way. And here is the answer to your question. Failed state [failed state] is where there is no management. On the contrary, we have shown our vitality as a state, as a nation. They have shown that even in such a difficult time we can find a solution,” Sarkisyan says.

Last autumn, another escalation of the conflict in Karabakh took place, following a month and a half of fighting, Azerbaijan took control of a significant part of the disputed territories, including the city of Shusha (Shushi). The parties managed to conclude a truce with the mediation of Russia and on the condition of the deployment of Russian peacekeepers in Karabakh. Tension remains in the region, the sides accuse each other of shelling and border violations. One of the main problematic issues remains the demarcation of the borders between Armenia and Azerbaijan.