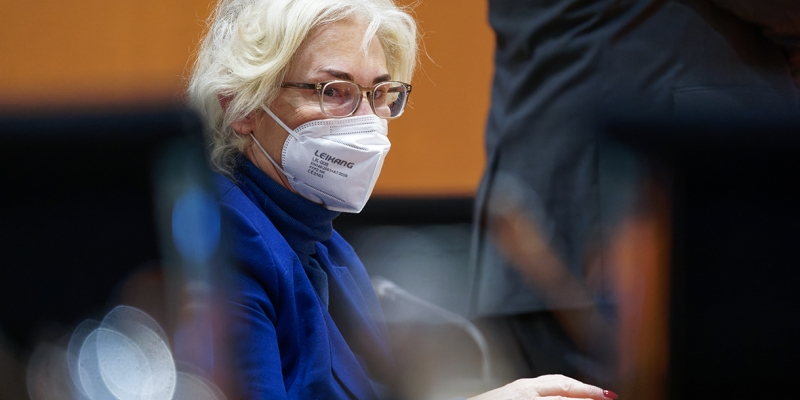 NATO will not allow blackmail from Moscow and will not agree with the Russian veto against expansion. This was stated by German Defense Minister Christina Lambrecht, reports Reuters.

“These red lines should be clear in all upcoming negotiations. But between these red lines and the military conflict, there are many opportunities that we should use,” she stressed.

Next week, the head of the German Defense Ministry plans to meet with NATO Secretary General Jens Stoltenberg in Berlin.

Russian Foreign Minister Sergei Lavrov said earlier that Moscow has raised the issue of non-expansion of the bloc to the east right now because it has run out of patience, because since the 1990s, NATO has “thrown into the basket” all the promises about non-expansion and non-deployment of significant forces in the territories of new participants.

Since the fall of 2021, reports have appeared in the Western media about a possible “invasion” of Russia into Ukraine. Moscow denied all the accusations. President Vladimir Putin pointed to the increased activity of NATO at the Russian borders and demanded legal guarantees of non-expansion of the alliance to the east.

On December 17, the Russian Foreign Ministry sent proposals to the United States and NATO on security guarantees. They contained a clause on the non-expansion of the alliance to the east, including an obligation not to accept Ukraine into the bloc. Negotiations on them with Washington and NATO took place on January 10 and 12, but the parties failed to agree on the item on Ukraine.

Prior to that, Estonian President Alar Karis urged the United States and NATO not to consider Russia’s “commands” on security guarantees that provide for the non-expansion of the bloc to the east. Swedish Defense Minister Peter Hultqvist said that Moscow defied international law by demanding that Ukraine not be accepted into the North Atlantic Alliance.