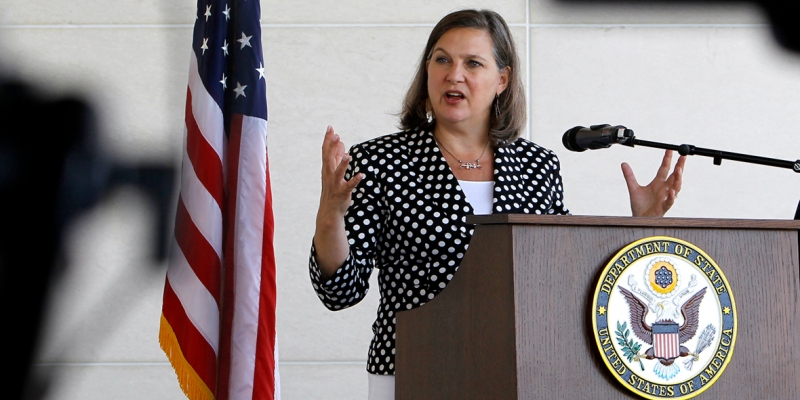 ZUS Secretary of State Victoria Nuland is confident that the implementation of the agreements reached in Geneva between Putin and Biden depends on the Russian side. She also spoke about the importance of bringing Russian hackers to justice

US Deputy Secretary of State for Political Affairs Victoria Nuland called the constructive tone of the discussions between American and Russian Presidents Joe Biden and Vladimir Putin in Geneva. But the agreements reached at the summit of the two leaders have yet to be implemented, Nuland warned. “We have identified several areas for cooperation, and we will see how things will go in the future,” she said on June 17 at the international security conference Globsec Bratislava Forum 2021 (broadcast on the forum’s Twitter).

On June 16, the first talks between Vladimir Putin and Joe Biden took place at the Villa La Grange in Geneva. The summit lasted approximately four hours. The first part of the meeting was held in a narrow format-it was attended by the heads of state, Russian Foreign Minister Sergey Lavrov and US Secretary of State Anthony Blinken, and the second part was expanded. Nuland was a member of the American delegation and took part in the second part.

Following the talks, Putin and Biden adopted a joint statement on strategic arms control. “Today we reaffirm our commitment to the principle that there can be no winners in a nuclear war and it should never be unleashed,” the document says. The two countries intend to launch bilateral consultations on strategic stability and cybersecurity.

The first area for cooperation is strategic stability. The second is cybersecurity, in particular the fight against ransomware. The third area is humanitarian cooperation in regions such as Syria and Afghanistan. “This is [interaction in the field of cybersecurity andstrategic stability], as well as our ability to cooperate in the field of humanitarian support for Syria, Afghanistan, and so on, will be our first steps [towards straightening relations], ” the diplomat noted. The implementation of the agreements reached in Geneva “depends on Mr. Putin”, Nuland stressed.

At the meeting with Putin, Biden, in particular, called for criminal prosecution of Russians involved in hacking attacks on American organizations, Nuland said. She called the topic of cybersecurity important for America, complaining that many attacks are being carried out on the United States from the territory of Russia. Putin in Geneva called the United States the leaders in hacking attacks.

Among the issues that Biden and Putin raised in Geneva was the situation in Belarus, Nuland said. “President [Biden] has made it clear that we fundamentally disagree with Russia, and I don’t think any of the presidents have tried to argue that we approach this issue from different angles.”;Nuland stated. She noted that Biden expressed indignation to Putin about the landing of the Ryanair flight in Minsk and the detention of the opposition Belarusian journalist Roman Protasevich. “Like Europe, we have already imposed sanctions [against the Belarusian authorities]. Stay tuned for next week’s news, ” the diplomat added.

Russia also imposed sanctions on Victoria Nuland herself, which became known in 2019 when she tried to get a visa to Russia. In the Obama administration, Nuland oversaw, among other things, relations with Ukraine during the Euromaidan events in 2013 and 2014. During the presidency of Donald Trump, she headed the Center for a New American Security (CNAS), and after the victory of Joe Biden, she returned to work at the State Department.