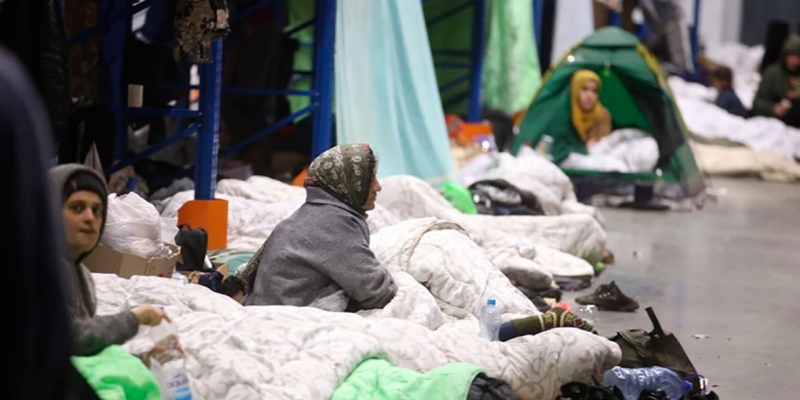 BBelarus was transferred $260 thousand to the “unfortunate”, while it has already spent dozens of times more, Lukashenko said. He claims that the West does not pay, because they think through whom to transfer in order to “steal half”

Belarus spent $12.6 million on the needs of refugees and related activities, while the West allocated only $260 thousand. This was stated by the President of the Republic Alexander Lukashenko, BelTA reports.

«Unhappy $260 thousand. «pressed». We counted three days earlier: we spent $12.6 million on all these activities. They transferred $260 thousand to our Red Cross. You see, they are so vile,” Lukashenko said.

He suggested that “the money is not going” because someone wants to steal some of the funds. “Our fugitives are sitting there now,” these are those who received funding stepwise. Even on animals, nature protection, something else. And it went through Lithuania, Poland. And there were filters sitting there that laundered, sucked out this money. They are not there now,” the president said.

Now the money needs to be transferred directly to the Secretary General of the Belarusian Red Cross Dmitry Shevtsov, he continued. “And Shevtsov is a patriot, and this money will go only to people. And they won’t stick to your hands— there are no intermediaries. Therefore, they are thinking through whom to transfer the money to steal half,” Lukashenko said.

On the eve of November 25, Lukashenko offered the European Union to pay for flights that take migrants home from Belarus. «Also scoundrels: « We allocated money: both millions and thousands…» Not a single penny of money was received here. The Red Cross is there and others. While we feed and drink these people, not at their expense. This is very important to them,” he said.

The situation in the border areas worsened on November 8, when a large convoy of migrants arrived there from the Belarusian side, the refugees set up camp directly at the border with Poland. They stated that they wanted to go to Germany. On the same day, Warsaw closed the border crossing «Smithy—«Bruzgi», not far from where they were going. Later, the Polish authorities presented Belarus with an ultimatum, threatening to restrict rail traffic, which was done on November 19.

Poland and Lithuania have increased the presence of security forces at the border with Belarus. Migrants have repeatedly clashed with Polish border guards at the border when refugees tried to break through the cordon and enter the EU.

Western countries believe that the transfer of refugees to the border was organized by the Belarusian authorities, who pursue their own political goals. In Belarus, these accusations were rejected and reported that the migrants act independently. According to Lukashenko, they can be used for political purposes by Poland itself, which “staged a massacre on the border to distract from internal problems”.

On November 15 and 17, Lukashenko spoke by phone with German Chancellor Angela Merkel. The parties agreed to resolve this issue between Belarus and the European Union, as well as appoint representatives from the two sides to start negotiations. The Belarusian side stated the need for the participation of international humanitarian organizations in the process of resolving the situation.

After that, the Polish side reported that most of the migrants had left the camp near the border. Migrants who had previously organized a camp on the Belarusian-Polish border in the area of the border crossing “Bruzgi”, left the camp and went in an unknown direction. The Belarusian authorities have placed them in a logistics center near the border. Minsk reported on several flights that sent migrants to their homeland.