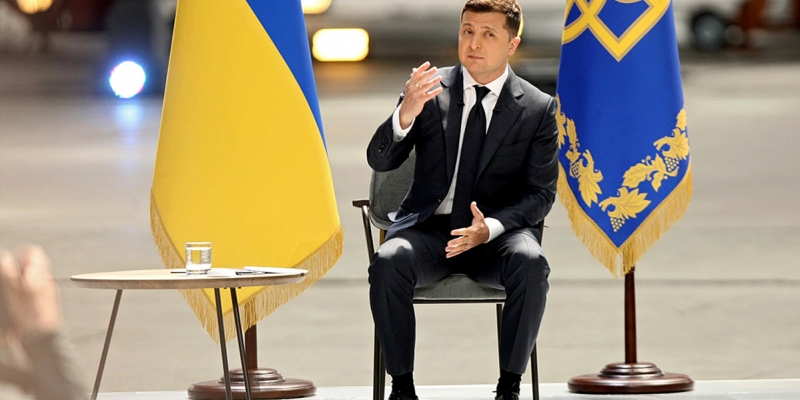 Pthe resident of Ukraine believes that it is necessary to preserve the Minsk agreements and find a new format for resolving the conflict. He expects to achieve this at meetings with Putin and Biden, and also did not rule out a referendum on the Donbass

The Minsk agreements on the settlement of the conflict in the east of Ukraine were initially “barely alive” document, according to the country’s President Vladimir Zelensky. He stated this in an interview with the channel “1+1”.

When asked by a journalist if he thinks that “Minsk died”, Zelensky replied: “He was born barely alive”.

At the same time, the Ukrainian leader pointed out that the Minsk agreements are the only document for resolving the situation in the Donbas and it should be preserved, but a new format is also needed. “I believe that the meeting with the President of Russia and my meeting with the President of the United States can provide a different agenda for solving these issues. At the very least, we need to try»,— Zelensky added.

According to the President of Ukraine, the issue of meeting with his Russian counterpart Vladimir Putin is on the agenda, the main topic of potential negotiations will be security issues. “With the Kremlin today, this is a matter of our probable possible meeting. <..."Our administrations have connected on the agenda and on the date and place of the meeting," he said.

Zelensky also said that in the event of a failure of negotiations on the Donbass with Russia, the United States or in the “Normandy format”, the question of further relations between Kiev and the region can be submitted to an all-Ukrainian referendum. “The wall” is a complete termination of the relationship in one form or another. I believe that this plan can be, but the decision to launch this plan should be made by the people of Ukraine, ” he noted.

At the end of April, Zelensky invited Putin to visit the Donbass and hold talks anywhere, “where there is a war”. In response, the Russian leader invited his Ukrainian counterpart to Moscow if he intends to discuss issues of bilateral relations. If the president of Ukraine wants to discuss the problem of Donbass, first he needs to meet with the heads of the self-proclaimed Donetsk and Luhansk People’s Republics (DPR and LPR) and only then with the Russian leadership, noted at this Putin. On June 9, he announced that theythere is always something to talk about with Zelensky, especially in the light of the accumulated problems between the countries. According to Putin, Zelensky, when he offered to meet him, wanted to discuss “international security”.

Zelensky’s meeting with US President Joe Biden is due to take place this summer: the American leader invited his Ukrainian counterpart to visit Washington. Zelensky clarified that the meeting would be held in July and it was planned to discuss the expansion of strategic cooperation between the two states.