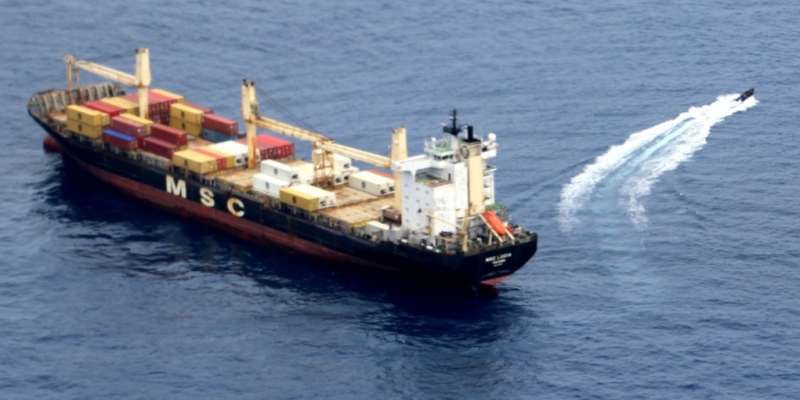 Russian sailors on duty in the Gulf of Guinea received a distress signal from a Panamanian vessel. They raised a military helicopter, at the sight of which the pirates who tried to seize the ship escaped

A boat with pirates leaves “Lucia”

Russian sailors prevented the seizure of a Panamanian container ship by pirates in the Gulf of Guinea off the west coast of Africa, the Ministry of Defense said in a statement (RBC has it).

“A Ka-27PS helicopter with a marine unit was immediately lifted from the Russian ship, which immediately headed to the area of the incident. When a military helicopter approached, the pirates left the ship, boarded a high-speed boat and headed towards the shore at full speed, the Russian defense ministry said in a statement.

Later, an anti-terror group moved from “Vice Admiral Kulakov” to “Lucia”, which released the crew and inspected the ship.

“Vice Admiral Kulakov” is part of a detachment of Russian warships that has been operating in the Gulf of Guinea for three weeks. The detachment ensures the safety of civil navigation by monitoring the surface situation with the help of carrier-based aviation.

Over the past year, pirates have repeatedly seized ships in the Gulf of Guinea. So, in December 2020, they attacked the tanker Agisilaos and kidnapped four crew members, including a Russian. The sailors were released in early January.

At the end of January, the cargo ship Mozart, flying the flag of Liberia, was seized off the coast of Nigeria. The pirates also took 15 sailors hostage. They were released in February.

In May, pirates attacked the fishing vessel Atlantic Princess, which flies the flag of Ghana. They captured five crew members, including a Russian. They were released in July.