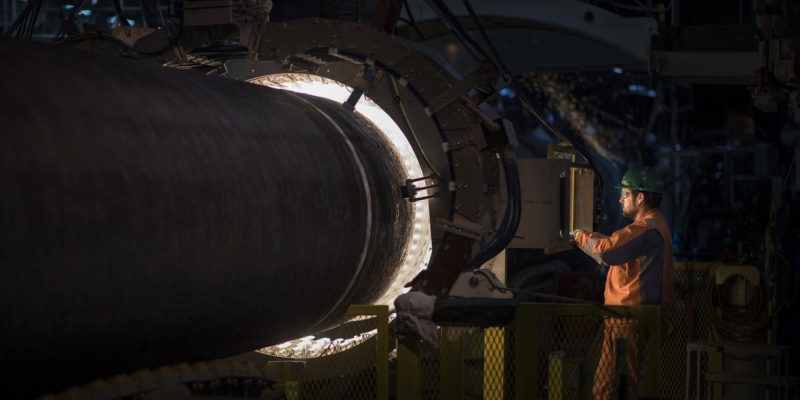 Peskov said that Russia is not going to use energy supplies as a weapon against other countries. Germany and the United States warned that they would take measures against Moscow if the Nord Stream-2 damaged Ukraine

Welding of pipes on board the pipe-laying vessel Pioneering Spirit

Russia does not use energy resources for political influence on other countries and rejects any attempts to accuse it of this. This was stated by the press secretary of the president Dmitry Peskov, reports TASS.

“Russia has always consistently rejected any accusations that it uses energy resources as an instrument of political pressure,” he said.

Thus, the Kremlin reacted to statements following the results of the negotiations between the United States and Germany on the Nord Stream-2, during which sanctions were allowed against Moscow if pressure was exerted on Ukraine in connection with gas transit.

According to the press secretary of the president, Russia has never engaged in such pressure and is not going to do it in the future. And the agreements on gas transit through Ukraine are exclusively issues of “commercial expediency”.

At the same time, Peskov confirmed that the Kremlin is aware of certain agreements between Berlin and Washington on the “Nord Stream-2” and Ukraine, but does not yet have sufficient data to comment on them.

“Let’s wait for some official information on this matter first. Either some text will be published, or some statements will be made in this regard. After that, we will evaluate them, ” the press secretary of the Russian president said.

The day before, Bloomberg reported that the preliminary agreement on the lifting of US sanctions against Nord Stream-2, which the US and Germany have reached, prescribes measures that can be taken against Russia if it uses gas supplies as a weapon against Ukraine.

In particular, Berlin, with such pressure on Kiev, will insist at the European level on the introduction of sanctions against Moscow to limit Russian energy exports.

The United States began to impose sanctions against the Nord Stream-2 at the end of 2019, which caused the construction of the gas pipeline to slow down. Washington stated that the project threatens the energy security of Europe and will lead to the loss of transit fees by Ukraine. The German authorities were in favor of completing the construction, noting that the country and Europe need Russian gas.

After President Joe Biden came to power, the rhetoric of the White House changed. The US lifted some of the sanctions against the project participants and did not introduce new ones, and also stated that at the current stage the new restrictions are ineffective, since the pipe is almost completed.

Last week, German Chancellor Angela Merkel held talks with Biden, during which an agreement was discussed to lift sanctions from the Nord Stream-2 in exchange for assistance to Ukraine. Despite the fact that Merkel spoke about the divergence of the positions of Berlin and Washington on these issues, the media reported that the parties managed to come to an agreement. The deal implies investments in energy projects in Ukraine, as well as compensation in case of loss of income from the transportation of Russian gas through its territory. The WSJ wrote that the deal could be announced as early as July 21.

In Kiev, Merkel and Biden were dissatisfied with the negotiations. Politico reported that Washington secretly recommended that the Ukrainian authorities refrain from criticizing the upcoming deal under the threat of worsening relations with the United States.

RBC in Vkontakte Instant news and videos in our Vkontakte group