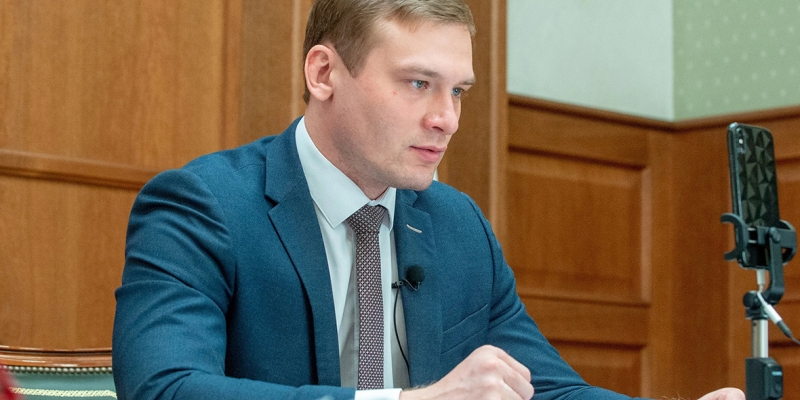 Pwhy can they replace the last governor not coordinated with the Kremlin from the opposition, the Kremlin is preparing the early resignation of the head of Khakassia, communist Valentin Konovalov. As his successor, the candidacy of the United Russia Sergey Sokol, who was elected to the State Duma in the Khakass single-mandate district, is being discussed

The presidential administration is planning the early resignation of the head of Khakassia, a member of the Communist Party of the Russian Federation, Valentin Konovalov, whose powers expire in 2023, a source familiar with the situation in the region told RBC, and two interlocutors close to the Kremlin confirmed. According to them, Konovalov may leave his post in the winter— in the spring of 2022.

The press service of the governor of Khakassia told RBC that there is no information about Konovalov’s possible resignation.

To date, Konovalov, who won the second round in 2018, remains the only governor from the opposition who has not been coordinated with the Kremlin. Two other representatives of the parliamentary opposition, who then won the elections from the current heads of regions from “United Russia” in the Khabarovsk Territory and the Vladimir Region, — representatives of the LDPR Sergey Furgal and VladimirSipyagin— no longer heads these regions. Furgal was detained in the summer of 2020, he was charged with organizing the murders of entrepreneurs Evgeny Zori and Oleg Bulatov and attempted murder, now he is in Lefortovo. And Sipyagin wrote a letter of resignation on his own and became a deputy of the State Duma.

The Kremlin initially considered Konovalov, who won through a protest vote, unprepared for the governor’s post. In the 2018 campaign, the communist, who at that time was 31 years old, participated as a “technical candidate”, whose nomination was agreed by the then head of the republic Viktor Zimin. As a result, Konovalov entered the second round with Zimin, later Zimin withdrew his candidacy from the elections.

At the January seminar for vice-governors on domestic policy, Khakassia was named among the outsiders in terms of trust in the heads of regions based on the results of summing up the KPIs for 2020, the participants of the event told RBC. Khakassia took the last place in the rating, the indicator of confidence in Konovalov was minus 48 percentage points (the difference between those who trust and distrust; in this case, the number of those who do not trust exceeded the number of those who trust), one of the seminar participants later told RBC.

Konovalov is not the worst governor, but the most unsuitable for Khakassia during this period, says an interlocutor of RBC familiar with the situation in the region. In 2018, he won not due to his high rating, but due to the high anti-rating of Zimin, “whom people perceived as a gentleman” if someone else had been in Konovalov’s place, someone else had been elected, the interlocutor adds.

Immediately after Konovalov’s victory, the residents’ request for his retention as governor, according to closed opinion polls, was over 60%. “People didn’t want to consider their choice a mistake,” says the source. No negative information against him worked: “The residents did not believe anything, believing that “he was being beaten for us”. He is young, it’s a pity for him. Such data showed the results of focus groups, the interlocutor of RBC clarifies.

The turning point, after which the level of support for Konovalov began to decline, was, according to the source, February 2019. Then, due to the accident, Khakassky Chernogorsk was left without heat, and the governor at that time flew to the Sochi Investment Forum (but then interrupted the trip and returned to the republic). «It was after this story that Konovalov began to lose—his ratings were correlated inthe negative side of the “,” clarifies the interlocutor. In the future, the attitude towards the governor was influenced by his “economic helplessness and poor environment”. In particular, in April last year, Acting Deputy Head of Khakassia, Minister of Construction and Housing and Communal Services Sergey Novikov was detained on suspicion of taking a bribe (at the same time, a number of officials working with Konovalov worked in Zimin’s team at one time).

Konovalov did not have a clear strategy for the development of the region from the very beginning, says another interlocutor familiar with the situation in the republic. Over time, situations began to arise that had a negative impact on his rating, problems with salaries, budget filling, the young governor had no influence on large enterprises operating in Khakassia: coal miners, “Rusal”, he lists.

Currently, according to closed social studies, the request for a change of the head of the region in Khakassia is more than 50%. “Konovalov still has a core of support, but it is melting,” says a source of RBC.

At the same time, Khakassia remains in last place among the regions in terms of trust in governors, said one of the interlocutors familiar with the situation in the region. According to closed opinion polls conducted this summer, almost 33% of respondents said they trusted Konovalov, almost 60% said they did not trust him, and 7% found it difficult to answer. The difference between those who trust and those who do not trust was minus 26.9 percentage points.

“Konovalov is a completely random head, Zimin himself chose a young Komsomol member to be his sparring partners, and then managed to lose to him. It would be correct to say that it was not Konovalov who won, but Zimin who lost,” says Vitaly Ivanov, an expert on regional policy. There are, of course, precedents when randoma person unexpectedly shows some abilities, begins to learn, but this is not the case at all, Ivanov is sure. Konovalov is not taken seriously by either the federal leadership, the republican security forces, or big business, he says: “In general, it is clear to everyone that he will be removed, and everyone is waiting for a new head with whom they will deal.”

The economic indicators of Khakassia, according to Afonin, are at average levels in the Siberian Federal District. “Of course, there may be a subjective attitude towards Konovalov, because he is a communist governor, there may be stuffing against him. But he has a firm character, he is not going to leave the republic, and I believe that he should finalize his term, and we will see what happens next after 2023,” the communist summed up.

Who can come to the region

At the moment, Sergei Sokol, a 50-year-old deputy of the State Duma of the VIII convocation from United Russia, is being considered as the most likely successor to Konovalov as governor, two sources close to the presidential administration said and confirmed by an interlocutor familiar with the situation in the region. In the elections to the State Duma, Sokol, who holds the post of head of the Irkutsk regional branch of United Russia, was nominated in the Khakass single-mandate district.

The possible appointment of Sokol to the post of acting governor was initially considered in connection with the campaign in the district – his victory had to be convincing, two interlocutors close to the Kremlin said. According to the results of the elections, United Russia won 28.88% of the votes, its closest competitor, communist Valery Starostin, 22.23%.

United Russia was considered for the post of governor of the Irkutsk region instead of communist Sergei Levchenko until his resignation in 2019, sources close to the Kremlin said earlier. Chemezov is a native of this region and has a great influence there.

In September 2018, Sokol was elected deputy of the legislative Assembly of the Irkutsk region, then he was elected speaker with the prospect of appointment to the post of acting governor. However, due to the complex intra-elite layouts in the region, this decision never took place— the Kremlin sent Igor Kobzev, Deputy Minister of the Ministry of Emergency Situations, who had previously had no connection with the region, to the Irkutsk region. And Sokol in March 2020 became a deputy of the State Duma – he was given the mandate of Olga Batalina after her appointment as Deputy Minister of Labor and Social Protection.