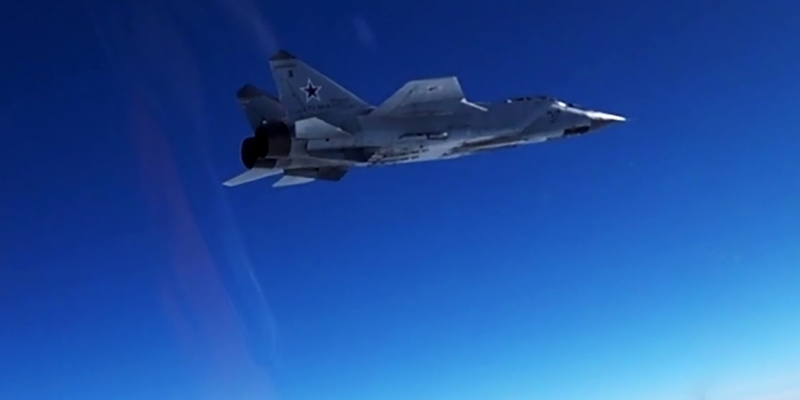 The maneuvers involve five ships, two submarines, and strategic aircraft. The exercises began against the background of the presence of the aircraft carrier Queen Elizabeth in the Mediterranean Sea. The British side previously reported that the Russian military was watching him

The Russian Defense Ministry has transferred two MiG-31K fighters to the Khmeimim air base in Syria, which can carry hypersonic missiles “Dagger”. This was reported to journalists in the military department.

This was done within the framework of the joint exercises of the forces of the permanent task force of the Russian Navy in the Mediterranean Sea and the aviation of the Russian Aerospace Forces, which started on June 25.

The commander of one of the MiG-31K crews said that they will perform “training tasks”. “The instrument approach systems and the airfield ensure the performance of tasks in both simple and complex meteorological conditions, day and night,” he added (quoted by RIA Novosti).

The maneuvers involved five ships, including the missile cruiser “Moscow”, the frigates “Admiral Essen” and “Admiral Makarov”, the submarines “Stary Oskol”and” Rostov-on-Don”, as well as anti-submarine and strategic aircraft, the Defense Ministry said.

The British aircraft carrier Queen Elizabeth is currently located in the Mediterranean Sea. On June 22, the Sky News channel reported that the Russian military was interested in him: according to the commander of the aircraft carrier strike group, Steve Moorhouse, since the aircraft carrier launched an operation against the Islamic State (a terrorist organization banned in Russia) on June 18, the Russian ship has approached it by 16 miles (about 25 km).

The Telegraph,in turn, wrote with reference to the commander of the air group, James Blackmore, that Russian MiG aircraft were watching the aircraft carrier. The British military also noticed the frigate of the Black Sea Fleet “Admiral Grigorovich”.

On June 14, the British destroyer Defender, which had previously been part of the Queen Elizabeth Air Group in the Mediterranean, entered the Black Sea. On June 23, according to the Russian Defense Ministry, he violated the border near Cape Fiolent in the Crimea and did not respond to warnings, so the Russian patrol ship was forced to open a warning fire. The British side responded by saying that the ship was sailing through international waters.