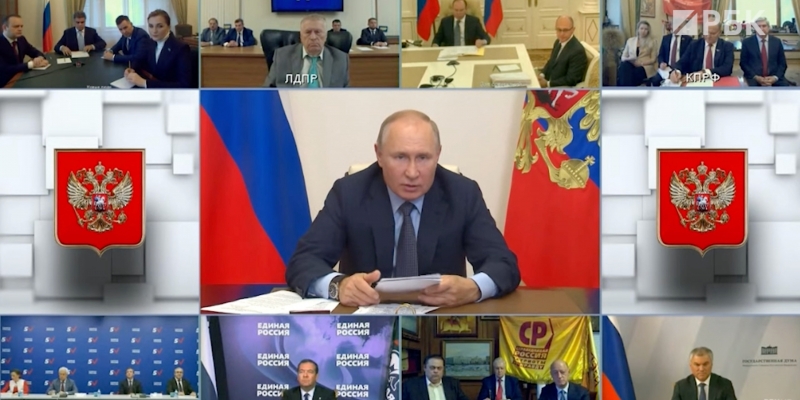 Pthe resident expressed the hope that the parties that have passed to the Duma “will realize their responsibility to Russia.” He noted that the powers of the lower house of parliament have changed in accordance with the updated Constitution

Russian President Vladimir Putin told what tasks the State Duma faces after the last elections. The broadcast of the president’s speech during the meeting with the leaders of the parties, held by video link, was conducted by the TV channel “Russia 24”.

“We all have many common challenges, common tasks. It is necessary to reduce the level of poverty in the country to a minimum, to pull a significant number of people out of it. It is necessary to improve the living conditions, development, education, and just nutrition of children in low-income families, ” he said.

According to the President, it is also necessary to increase the level and accessibility of modern healthcare and education for everyone in the country, as well as to continue changes in the structure of the economy in favor of advanced high-tech industries. “All these are not just common tasks, but tasks that unite us,” he added.

In addition, the president congratulated the New People party, which became the fifth party in the lower house of the Russian parliament for the first time in 14 years. He also called on the party leader Alexey Nechaev to implement the ideas of the parties that lost the elections, so that “nothing was lost” from what was said by those who did not pass. “Other parties that went to the elections with interesting ideas did not get into parliament. Well, it depends not only on what the ideas are & lt;… & gt;. The question is the credibility of the presentation of the material, ” the president added.

In single-mandate districts, “United Russia” won in 198 of them (88%), candidates from the Communist Party became leaders in nine districts (4%), “Just Russia” won in eight, the LDPR ” in two. Also, the “Motherland”, the Party of Growth and the “Civic Platform” won each in one district.

Vladimir Putin held a meeting with the leaders of the parties that passed the State Duma in the video conference mode. Earlier, he went into quarantine due to the fact that dozens of people in his close environment were infected with the coronavirus. The test result of the president himself was negative. His press secretary Dmitry Peskov described Putin’s well-being as good, but did not give a date for the end of the quarantine.

In addition to the party leaders, Peskov announced Putin’s meetings with the top five of the federal list of the United Russia party in the State Duma elections, including Sergei Lavrov and Sergei Shoigu. “Meetings are really planned,” he said. The source of RBC clarified that the preliminary communication was scheduled for September 27.