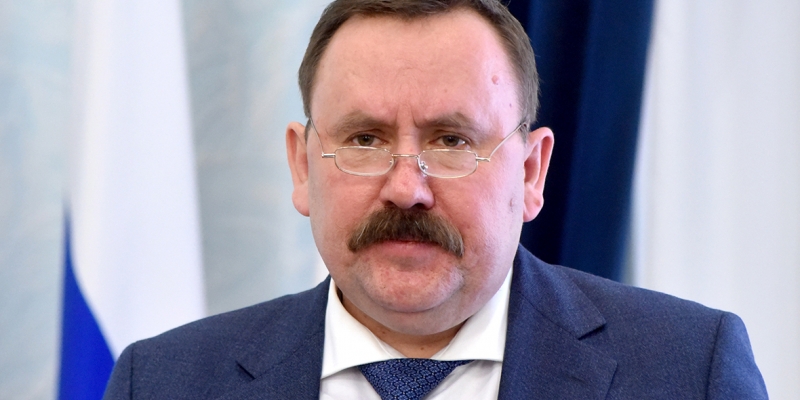 The new director of the FSIN was the Deputy head of the Ministry of Internal Affairs, Colonel-General Arkady Gostev. This may mean the transfer of actual control over the prison system in Russia from the FSB to the Interior Ministry, sources say RBC

Lieutenant General Alexander Kalashnikov has been dismissed from the post of head of the Federal Penitentiary Service (FSIN), it follows from the decree of President Vladimir Putin. Deputy Interior Minister Arkady Gostev has been appointed as the new head of the department.

Two RBC sources close to the FSIN reported that the appointment of Deputy Interior Minister Arkady Gostev to the post of head of the service could mean the transfer of actual control over the prison system in Russia from the FSB to the Ministry of Internal Affairs. Kalashnikov has been the head of the Federal Penitentiary Service since October 2019. Prior to that, he served in the state security agencies of the USSR and Russia, including the head of the FSB offices in Komi and the Krasnoyarsk Territory.

According to the source, Arkady Gostev is part of the inner circle of Interior Minister Vladimir Kolokoltsev. Another interlocutor of RBC reported that Kalashnikov, from the moment of his appointment to the post of director of the FSIN, was considered a creature of high-ranking FSB officers.

In 2018, RBC reported that the state legal department of the presidential administration discussed a draft reform of the service, suggesting its division into two departments – civil and law enforcement. It was planned that the federal agency under the Ministry of Justice would deal with the re-education, re-socialization and economy of prisoners,and the protection of prisons together with the special forces of the FSIN will go to Rosgvardiya. The FSIN, as a subject of operational investigative activity, which includes operational departments engaged in recruiting agents, wiretapping telephone conversations and searching for escaped prisoners, it was assumed that they would transfer to the Ministry of Internal Affairs.

Human rights defenders from Gulagu.net In October, they reported that they had received an archive with 40 GB of torture videos. The first videos were released in early October. The archive was collected by a former prisoner Sergei Saveliev, who was serving time under the article on the transfer of drugs. According to him, during his imprisonment, he came across recordings of video recorders with torture, which he archived and hid. After his release , Saveliev transmitted a video Gulagu.net . The website of the human rights center has been blocked since July by Roskomnadzor based on the decision of the Moscow City Court.

At the end of October, lawyer Snezhana Muntyan reported that more than 400 prisoners of Saratov colony No. 13 complained about the use of violence, bullying and torture against them.

On November 10, the FSIN announced the dismissal of 18 employees of the Saratov department of the service. The reason for the decision was a series of videos published by the human rights project Gulagu.net . The video captured the torture and abuse of prisoners in the tuberculosis hospital No. 1 of the Federal Penitentiary Service of the Saratov region.

Human rights activists wrote that the torture of prisoners was committed by other convicts acting on the instructions of the FSIN and law enforcement agencies, and the victims of torture were those who did not want to cooperate with the administration.

The UK, the Prosecutor General’s Office and the Federal Penitentiary Service have begun to conduct checks on information about torture. Later, Kalashnikov dismissed Pavel Gatsenko from the post of head of the prison hospital in Saratov and dismissed several other employees of the medical institution.

Presidential spokesman Dmitry Peskov, commenting on the situation, said that law enforcement agencies will deal with the torture video.

The FSIN has been constantly shaken by scandals in recent years.In March last year, the head of state dismissed Deputy head of the Federal Penitentiary Service Valery Maksimenko, who was engaged in economic issues, organization of construction, reconstruction and repair. In November 2020, Maksimenko was detained and arrested on charges of abuse of official authority (Part 3 of Article 285 of the Criminal Code). According to the investigation, in 2018, he illegally organized the conclusion of state contracts for the construction and repair of facilities between the territorial administrations of the Federal Penitentiary Service and its construction department in the North Caucasus Federal District.

As a result, the target program was not executed in the amount of more than 2.1 billion rubles, and 14 facilities were not put into operation.

In 2019, the deputy director of the FSIN Oleg Korshunov, who was responsible for the economy in the FSIN, was sentenced to seven years in prison for a scam with the production of shoes for the needs of the FSIN. Officially, the service ordered shoes from the departmental Production and Industrial House (PPD), but in reality the production was organized by a private company “DATSE Group”, and cheaper materials were used for the manufacture of shoes than the contract documentation provided. A year later, Korshunov was sentenced to nine years for fraud in the purchase of fuel and sugar.

Before Kalashnikov, Gennady Kornienko held the post of head of the FSIN for seven years. Putin signed a decree on his dismissal in October 2019. RBC wrote that the formal reason for Kornienko’s resignation was the achievement of the age limit for being in the civil service, he turned 65. In July 2018, Novaya Gazeta published a video of the beating of a convict in Yaroslavl colony No. 1. The publication received a wide public response. Employees of the colony became defendants in criminal cases.

Kornienko’s predecessor Alexander Reimer was arrested in 2015, three years after his resignation, on charges of fraud for 3 billion rubles. when purchasing electronic bracelets for those under house arrest.His deputy Nikolay Krivolapov, Director of the Center for Information Technology and Communications (CYTOS) of the Federal Penitentiary Service Viktor Definenov and general director of a commercial organization Nikolay Martynov were also accused of fraud.

In 2017, the Zamoskvoretsky Court of Moscow sentenced Reimer to eight years in a general regime colony and a fine of 800 thousand rubles.