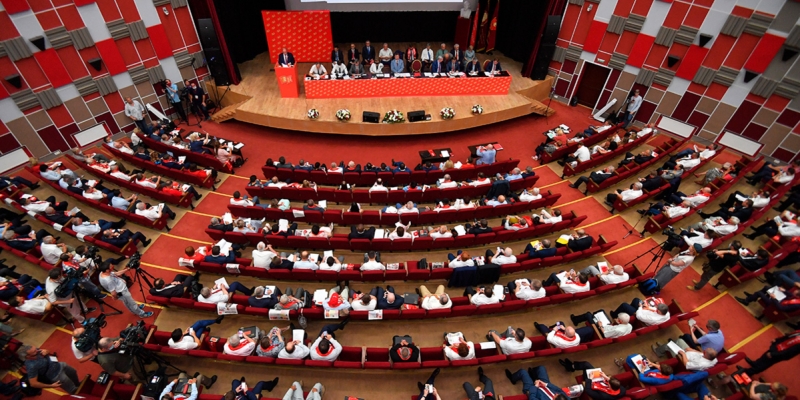 The Congress of the Communist Party of the Russian Federation decided on the federal part of the list for the State Duma elections, it included 15 people. Zakhar Prilepin tried to get to the pre-election forum of the Communists, but he was not allowed

Who was included in the federal list of communists

On Thursday, June 24, the second stage of the pre-election congress of the Communist Party of the Russian Federation was held in the boarding house “Snegiri” near Moscow. The delegates approved the federal part of the list for the State Duma elections. It included 15 people— the maximum number of candidates possible by law. The first three are the head of the party, Gennady Zyuganov, cosmonaut and State Duma deputy Svetlana Savitskaya and the head of the Lenin State Farm;,former presidential candidate Pavel Grudinin. Also on the list are the governor of the Orel region Andrey Klychkov, the first deputy chairman of the State Duma Ivan Melnikov, deputies Yuri Afonin, Vladimir Kashin, Dmitry Novikov, Nikolai Kharitonov, Nikolai Kolomeitsev, Sergey Shargunov, Vadim Kumin, Yuri Sinelshchikov, Kazbek Taisaev and Alexey Kurinny.

What will be the federal lists of other parties

On June 20, the federal list of “United Russia” was announced, it included five people. Representatives of the coalition “Fair Russia” Patriots “For the Truth” have repeatedly told RBC that there will be only three candidates on their federal list: co-chairmen of the parties Sergey Mironov, Gennady Semigin and Zakhar Prilepin. The LDPR promised that their federal list will also include 15 people.

Regional groups of the Communist Party were headed by deputies and regional party functionaries & mdash; among the leaders of such groups are the Mayor of Novosibirsk Anatoly Lokot, the head of the Buryat branch of the Communist Party, ex-senator Vyacheslav Markaev and former Governor of the Irkutsk region Sergey Levchenko.

The Communist Party of the Russian Federation, in addition, nominated candidates in all 225 single-mandate districts for the Duma elections.

Also during the congress, it became known that the Left Front movement, led by Sergei Udaltsov, has united with the Communist Party. It is the Communists who can become the main unifying force on the left-patriotic flank, Anastasia Udaltsova, a representative of the movement, explained this decision. First Deputy Chairman of the Central Committee of the Communist Party of the Russian Federation Yuri Afonin told reporters that the authorities are trying to “create spoiler parties on the left flank”;,however, ” they will not succeed, because it is impossible to deceive people for a long time.” “Our team has absorbed the most prominent representatives of the left, communist, working-class movement of our country. <..."Our list includes representatives of the Left Front, the Movement for New Socialism, Labor Russia, in fact, all movements that are real popular movements," he said.

The list of the Communist Party of the Russian Federation can be called a compromise, political scientist Alexander Zhalov noted in a conversation with RBC: on the one hand, there are several “bright, critical figures in it, whom the authorities did not want to let into the State Duma” Grudinin, Kurinny; on the other hand, it did not include figures who “were under fire for criticism of the presidential administration” SergeyLevchenko, Valery Rashkin, Nikolai Bondarenko. According to the expert, the composition of the list of the Communist Party will not lead to a significant expansion of its electorate, as it reproduces the traditional structure of the party. At the same time, Zhalov called it a good decision to include Grudinin in the top three, who still remains a fresh face for the Communist Party and a fairly popular opposition politician.

“The Communists are now justifiably claiming a confident second place in the elections, this is the second-ranked party,” Zhalov summed up.I think that they have a significant chance to improve their positions in the State Duma elections compared to 2016 and there is a high probability that they will receive the majority of mandates on the lists. That is, they have enough list mandates for both the federal part and for most of the leaders of large regional groups.

How Zakhar Prilepin was not allowed to attend the congress

At the congress of the Communist Party of the Russian Federation, there were some surprises: the co-chairman of the coalition “Fair Russia”, the Patriots For the Truth, writer Zakhar Prilepin, came to “Bullfinch”. He brought coffee and croissants with him, two eyewitnesses of the event told RBC, but he could not get to the event.

Prilepin planned to speak at the congress and suggest that the Communists create a coalition by signing a memorandum of cooperation, but he had to be satisfied with a telephone conversation with the leader of the Communist Party. This was reported to RBC in the press service of the coalition of three parties. “In a telephone conversation with Gennady Andreevich, at his suggestion and invitation, we should meet next week and discuss working issues,” Prilepin explained.And I hope that my proposal to create a memorandum and a coalition will at least be accepted for consideration, because we take this extremely seriously.

The Communists did not appreciate the gesture of the co-chairman of the rival party: Prilepin arrived at the congress without warning, so he was not allowed there, Alexander Yushchenko, Zyuganov’s press secretary, told RBC. According to him, a telephone conversation really took place between Zyuganov and Prilepin, during which the Communist leader suggested that Prilepin discuss all issues next week. “There was no conversation about the memorandum, there was no conversation about cooperation, there was just a hospitable and respectful conversation on the part of Gennady Andreevich,” Yushchenko said.

The representative of the Communist Party noted that the party already has a coalition of people’s patriotic forces, which includes women’s, military organizations, the movement “For a new Socialism”. “We have many organizations, I do not know what Zakhar is talking about. He chose his path with “Fair Russia”, with Semigin. <...& gt; With Semigin, we are definitely not on the way, we were already on the way with him, & mdash; saidYushchenko also noted that the Communist Party is ready to discuss Prilepin's coalition ideas, but stressed that he is "bound by certain obligations". "In this case, Zakhar made his choice & mdash; he entered into a structure that, in our opinion, is not completely independent. <..."Therefore, the question is how far he is ready to go here," the representative of the Communists explained.