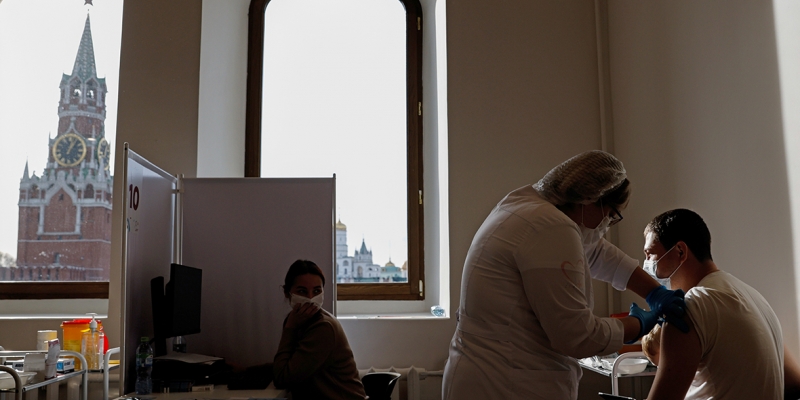 Efforts to encourage people to get vaccinated against coronavirus have been found to be insufficiently effective. Now it is planned to change the accents of the campaign, to connect volunteers and sociologists

The information state campaign to promote vaccination against COVID-19 is planned to be restarted, since the previous one did not achieve its goals, Kommersant reports, citing sources close to the presidential administration. This was also confirmed by a source of the publication and in the administration itself.

According to the newspaper, the Kremlin’s internal political bloc will be actively involved in the information work. The instruction to closely address the issues of the effectiveness of the information campaign came from the first deputy head of the presidential administration Sergey Kiriyenko. Now the administration regularly holds meetings and briefings on this topic, writes Kommersant.

“So far, the unified concept of managing this agenda has not been definitively formulated. Which department of the AP [presidential administration] will be responsible for it has not yet been determined. But the concern about this topic is high,” explained one of the sources of the publication.

Initially, the campaign to promote vaccination against coronavirus was mainly led by the ANO “National Priorities”, but the authorities concluded that the work was not carried out effectively enough. One of the interlocutors of “Kommersant” explained that the campaign was carried out too aggressively and negatively, since the main focus was on the threat of death in case of refusal of vaccination. Now it is planned to change the vector and emphasize that vaccination will allow a person to live a full life, including going to the cinema and studying.

Another source believes that during the previous campaign, too much emphasis was placed on Moscow and too little on the regions. In addition to correcting this imbalance, it is planned to strengthen the fight against vaccination opponents.

The presidential administration plans to involve volunteers in convincing the population of the need for vaccinations, in particular, to resume the work of the headquarters of the action “We are together”.

In addition, the Expert Institute of Social Research (EIS) was involved in determining the right direction of the new company. Gleb Kuznetsov, the Institute’s main expert on the pandemic, drew attention to the experience of countries where vaccination is proceeding at the fastest pace. According to him, there the authorities were able to build in the minds of citizens a direct link between the lifting of restrictions and vaccination. He also believes that it is necessary to create a separate institute that deals exclusively with vaccination issues, as well as to send out personalized invitations to citizens for vaccination with a specific time.

In mid-October, the deputy speaker of the State Duma, Pyotr Tolstoy, said that the information vaccination campaign in Russia was “conducted incorrectly and completely lost”. “There is no trust of people to go and get vaccinated, this is a fact,” he stressed.

Presidential spokesman Dmitry Peskov also explained the low rates of vaccination by an insufficiently active campaign to explain the lack of alternatives to vaccination.

Denis Protsenko, the head physician of Hospital No. 40 in Kommunarka, in turn, addressing his fellow doctors, urged them to “speak frankly and without embellishment” with the population. “I feel that in the explanatory plan, we are all very under-working with you,” he noted.