EExperts believe that an early meeting between Joe Biden and Vladimir Putin is possible, US Deputy Secretary of State Victoria Nuland concluded her visit to Russia by holding meetings at the Foreign Ministry and the presidential administration. Experts do not exclude that she was preparing a new bilateral summit 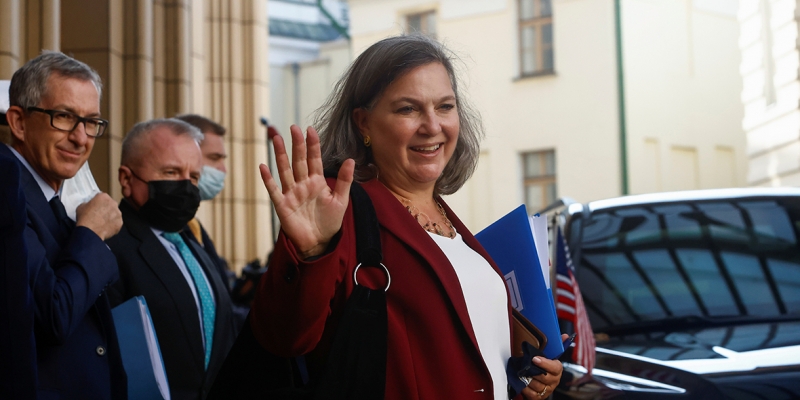 Five years separated the visit of US Deputy Secretary of State Victoria Nuland to Moscow, which ended on October 13, and her previous visit to the Russian capital. In the summer of 2016, Nuland accompanied former Secretary of State John Kerry and became a symbol of Washington’s intervention in the situation in Ukraine among Russian officials: Russian politicians still remember the cookies she distributed in the winter of 2013 on the Kiev Maidan.

As it turned out in 2019, Nuland was included in the Russian sanctions list, and in order for the current trip to take place, Moscow had to withdraw her from sanctions. According to the official representative of the Russian Foreign Ministry, Maria Zakharova, the Russian authorities took such a step in exchange for permission for a Russian diplomat to enter the United States. As specified by the Deputy MinisterSergei Ryabkov, Acting Deputy Director of the Foreign Ministry’s Department for Nonproliferation and Arms Control Konstantin Vorontsov, who since 2019 could not enter the United States to participate in the UN General Assembly in New York, received an American visa. “We are satisfied that such a change did happen,” Ryabkov told RIA Novosti.

The initiative to arrange a visit of the Deputy Secretary of State to Russia belonged to the Americans, the trip became part of a tour— from Moscow, Nuland went to Beirut and London.

In three days in Moscow, Nuland managed to hold meetings at the Ministry of Foreign Affairs and the Presidential Administration, visit the Garage Museum, meet with participants of exchange programs for young professionals. On Tuesday, Nuland spoke with Ryabkov, and Deputy Defense Minister Alexander Fomin was also present at these talks. One of the main topics was the work of the embassies of the two countries (after mutual cuts and expulsions of diplomats, the American embassy stopped issuing visas to Russians). “On the Russian side, it was stressed that hostileanti-Russian actions will not remain unanswered, but Moscow does not seek further escalation. We propose to lift all the restrictions imposed by both sides over the past few years,” the Russian Foreign Ministry conveyed the contents of the Russian proposals. Progress has not been achieved, but consultations will continue, Ryabkov told reporters. And he did not rule out the possibility of mutual freezing of the work of diplomatic missions in the event of a deterioration of the situation, although, according to him, Moscow wanted to avoid this. According to Fomin, issues of strategic stability were also discussed.

On Wednesday, Nuland was received by Presidential aide for Foreign Policy Yuri Ushakov and Deputy head of the Presidential Administration Dmitry Kozak, who oversees the Ukrainian settlement. “During the negotiations, the voiced in Geneva (at the summit of the presidents of the two countries) was confirmed.—RBC) the US position that without agreeing on the future parameters of autonomy, or, in other words, the special status of Donbass as part of Ukraine, substantial progress in resolving the conflict is hardly possible,” Kozak told reporters. He noted that Nuland confirmed that a settlement in the south-east of Ukraine is possible only with the approval of a special statusDonbass, and the Minsk agreements remain the only basis for this decision. According to Kozak, he and Nuland agreed to continue mutual consultations. According to the interlocutor of RBC, familiar with the content of the meeting, Nuland admitted that disputes about the causes and sides of the conflict are unproductive and ended with the signing of the Minsk agreements in 2014.

She herself limited herself to a brief comment after negotiations with Ushakov. “We remain committed to a stable and predictable relationship,” Jason Rebholz, a spokesman for the American Embassy in Moscow, wrote on Twitter on her behalf.

Victoria Nuland has a reputation as one of the best US experts on Russia. She, like her husband, The Washington Post’s international columnist Robert Kagan, is considered a neoconservative. In the summer of 2020, the diplomat published a program article in the Foreign Affairs magazine “Pin Down Putin: How a Self-confident America should behaveIn which she criticized Washington’s lack of rigidity towards Moscow and argued that the sanctions imposed against Russia are not so effective and do not impress the Kremlin. According to Nuland, it is possible to talk to Russia only using the carrot and stick method.

Waiting for a new summit

Press Secretary of the President of Russia Dmitry Peskov described Nuland’s contacts as timely and necessary, but noted that one should not expect breakthroughs from the visit. Vladimir Putin said on Wednesday that Nuland had discussed in Moscow the possibility of his contacts with US President Joe Biden.

Director General of the Russian International Affairs Council Andrey Kortunov, in a conversation with RBC, suggested that the purpose of Nuland’s visit to Moscow was to assess whether there were conditions for holding the second summit of the leaders of Russia and the United States. “It doesn’t seem to me that this is a purely ceremonial visit. If he was such, then he would not be sentNuland, and the other person, maybe, was Secretary of State Anthony Blinken himself. He is also a diplomat, very specific and experienced. I think the task was to see how much areas of joint cooperation have already been developed, allowing us to raise the issue of holding a second summit,” he explained.

Kortunov also recalled that at the June meeting between Putin and Biden in Geneva, the American president offered to see how relations would develop. During this time, it was possible to establish contacts on arms control and strategic stability and agree to extend last year’s UN Security Council resolution on Syria. However, the parties failed to make progress in negotiations on a number of regional issues and the Iranian nuclear issue.the deal, by the time the Afghan issue arose. “Now both sides have to evaluate what has been done and make a decision: work is beginning on a new summit and we can consider the period of our relations, starting in June, fruitful enough to continue contacts at the highest level, or it is premature. Theoretically, Putin and Biden can meet even during or after the Glasgow Climate summit (the summit will be held in late October and early November.—RBC). There may be other options for the meeting, if everyone will present something, — admits Kortunov.