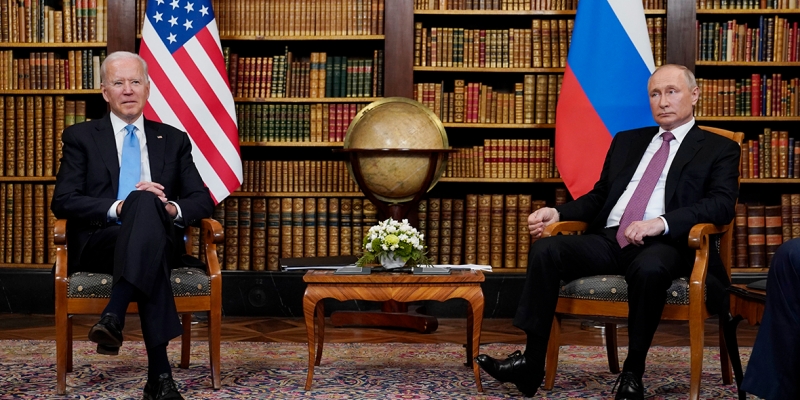 The second meeting of the presidents of Russia and the United States may take place in the not so distant future, managing director of the consulting company Kissinger Associates Thomas Graham told RBC

Prepared Nuland summit of Russia and the USA

Russian President Vladimir Putin and American leader Joe Biden can always talk to each other, there are opportunities for such a meeting in the future, according to Thomas Graham, adviser to President George W. Bush on Russia, managing director of the consulting company Kissinger Associates.

In a conversation with RBC, he noted that this could be both a full-fledged summit, like the one that took place earlier in Geneva, and negotiations on the sidelines of international events. Graham recalled that following the results of the summit in Geneva, Biden proposed in six months or a year to assess the implementation by the parties of the agreements that the leaders agreed upon during the negotiations.

“It’s been almost six months since Geneva, so I think the two presidents will probably talk to exchange views on what has been done, what is positive and what should be changed to improve the interaction between our two countries. I do not know if Victoria Nuland came specifically to prepare for the second meeting, but I am absolutely sure that the second meeting of our presidents will not take place in the distant future,” Graham said.

US Deputy Secretary of State Victoria Nuland paid a three-day visit to Moscow on October 10–13. The last time she was in the Russian capital was in 2016 as Assistant Secretary of State for European and Eurasian Affairs. The trip planned for 2019 did not take place because Nuland was on the blacklist of persons who are banned from entering the country. It was possible to exclude the diplomat from it only in exchange for an American visa for the acting deputy director of the Department of the Ministry of Foreign Affairs for Nonproliferation and Arms Control Konstantin Vorontsov. He has not been able to attend the UN General Assembly in New York since 2019.

In three days in Moscow, Nuland managed to hold meetings with Deputy Foreign Minister Sergei Ryabkov and in the Kremlin, where she was received by Presidential aide for Foreign Policy Yuri Ushakov and Deputy head of the presidential Administration Dmitry Kozak, who oversees the Ukrainian settlement.

Director General of the Russian International Affairs Council Andrey Kortunov, in a conversation with RBC, suggested that the purpose of Nuland’s visit to Moscow was to assess whether there were conditions for holding the second summit of the leaders of Russia and the United States.

“I don’t work for the government, so I don’t know exactly why it decided to send her to Moscow. It is clear that Victoria Nuland remains a key person in carrying out our policy in the Russian direction. It is very important for her to have contacts with Russian officials and initiate discussions on a wide range of issues on the US-Russian agenda, establish working relations so that this process can continue. As I said, it was not a surprise to me that there were no loud statements (following the results of the visit.—RBC) or breakthroughs— the questions are too complicated. I think the result was an agreement to maintain the dialogue and to be professional about its promotion,” Graham said.

On October 24, presidential press secretary Dmitry Peskov said in an interview with Russia 1 TV channel that the Kremlin considers a new meeting between Putin and Biden necessary, but it is not yet possible to say exactly in what format it will be and when.

Strategic stability was given five years

One of the outcomes of the meeting of the Presidents of Russia and the United States in Geneva was an agreement to resume consultations on strategic stability. Since that moment, several rounds of negotiations have already taken place, the last of them was held on September 30 in Geneva. The Russian delegation was headed by Ryabkov, and his American counterpart was US Deputy Secretary of State Wendy Sherman. Following the meeting, the parties agreed to form two expert working groups: on the principles and objectives of future arms control and on capabilities and actions that can have a strategic effect. The delegations also agreed to hold a third round of negotiations.

“Strategic stability is a very difficult issue at the moment. The global environment is not bipolar in the strategic way it was 10, 20, 30 or 40 years ago, when the Soviet Union and the United States first developed a bilateral arms control regime. There are other nuclear forces, first of all China. There are various types of conventional weapons that also have strategicmeaning. Other developments in cyberspace and in space have a greater impact on strategic stability than we think. So this is a serious, detailed conversation that needs to be held. This is not something that can be solved in one or two sessions. It is important to make tangible progress in the negotiations in order to continue to create working groups on specific issues,” Graham said.

According to him, it is important for the parties to reach, if not agreements, then at least understanding on specific issues. The expert recalled that Russia and the United States extended the Treaty on Measures for Further Reduction and Limitation of Strategic Offensive Arms (START III) for five years. “Agreements (on strategic stability.—RBC) must be achieved within these five years, or we will lose the basis of strategic stability. So we don’t have much time, we need to think about a new environment and new approaches to strategic stability in order to promote it around the world,” Graham concluded.